At just ten years of age, Anna Maria Steinbach, known to her friends and family as ‘Setella’, was gassed in Nazi Germany’s Auschwitz-Birkenau extermination camp. While many may be unfamiliar with her name, many will be familiar with her image.

Staring out of a wagon, her face full of fear as she was transported to the concentration camp, Anna was captured on camera by Rudolf Breslauer. Years later, the footage of her would appear in documentaries, and her image would become an iconic emblem of the Holocaust. Referred to as ‘the girl with the headdress’, it was assumed the little girl was of Dutch-Jewish origin.

It wasn’t until the 1990s that the identity of the girl in the footage was uncovered. Thanks to the work of Aad Wagenaar, the Dutch journalist was able to identify when Anna, along with her family, had been transported to the camps.

Captured in a raid against Roma in Eindhoven on 14 May 1944, she was first taken to Westerbork concentration camp, along with 577 others. There, her head was shaved, said to be a preventive measure against lice. After that, she began to wrap her head in a cloth, like other Roma women and girls who suffered the same fate.

On 19 May, she was transported to Auschwitz-Birkenau extermination camp, along with 244 others, when the footage of her was captured. She would be murdered there, in a gas chamber, on 2 August 1944.

On identifying which transport Anna was in, Wagenaar tracked down the girl’s fellow passenger and Holocaust survivor, Crasa Wagner, in February 1994. She was able to reveal the girl’s name – Anna Maria Steinbach – leading to the discovery that Anna was not a Dutch Jew but a Sintiza (Sinti).

Born in the Netherlands, her family had come from Germany, her father a trader and violinist. Growing up in a wagon, her family moved around regularly searching for work and likely left Germany as persecution of the Roma was stepped up from the mid-1930s onwards.

The discovery of Anna’s Sinti origins was particularly poignant when the dominant canon of Holocaust studies and remembrance activities failed to acknowledge the persecution of Roma and Sinti in the genocidal events that occurred under the Nazis during the Second World War. From being featured in the US Holocaust Memorial Museum to building a Roma Holocaust memorial in Berlin, Europe’s Roma communities have faced a long struggle to achieve acknowledgement of their racial persecution under Nazi Germany.

The discovery then, that the iconic image of the ‘girl in the headdress’ was Sinti, spoke to the suffering of the wider Roma community, long silenced. Anna’s iconic image serves as an important rallying point for today’s Roma communities, not only in acknowledgement of their suffering during the Holocaust but the continued persecution Roma communities continue to face today.

This 2 August, on Roma Holocaust Memorial Day, we remember Anna, and the many other hundreds of thousands of Roma and Sinti, many of whose names we do not know, who lost their lives in the Holocaust. However, our struggle is not yet over. We continue to call on the relevant authorities to formally recognize 2 August as the official Holocaust Memorial Day for Sinti and Roma and incorporate the Roma Holocaust into official memorials, museums, curricula and relevant educational and cultural institutions. 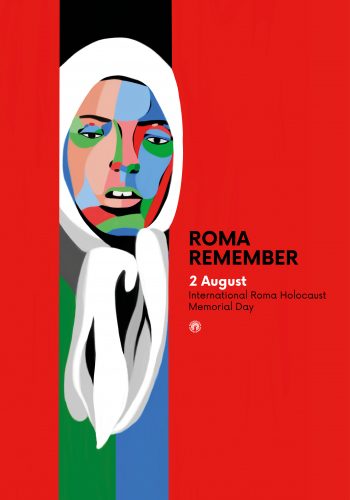