Formations of Solidarity in the Western Balkans and Beyond – M14WB

By joining Manifesta 14 Prishtina_Co-Producing Common Space and Shaping Formations of Solidarity in the Western Balkans and Beyond, ERIAC ensures that Roma communities are included and represented and that their contribution to the vibrant culture of the region is properly reflected in the process of developing innovative, inclusive and transformative models for cultural institutions in the Western Balkans.

–ERIAC – The European Roma Institute for Arts and Culture, joint initiative of the Council of Europe, the Open Society Foundations, and the Alliance for the European Roma Institute, promotes cultural diversity by increasing visibility and awareness for the importance of Roma culture and language as an integral part of the European culture. Operating from our two offices in Berlin and Belgrade, ERIAC is uniquely positioned to dispel prejudice and to encourage Roma pride in their role in European history and culture, including in the Western Balkans.

Of the estimated 10 to 12 million Roma living in Europe, around 1 million is estimated to live in the Western Balkan region. For centuries, the Roma have contributed to the artistic and cultural heritage in this region, yet these contributions have often remained invisible.

With Roma Rajni, ERIAC brings together the painterly oeuvre of Farija Mehmeti and the RomaMoMa Library at the National Library of Kosovo. The exhibition consists of 39 portraits shown in an oasis-like part of the library highlighted by natural light seeping through the roof window. In this environment, Mehmeti displays a multifaceted mosaic of imaginary characters to contemplate and honour the everyday heroism in and struggle for existence of ordinary Roma women. In showing powerful brown women wearing traditional Romani fabrics and jewellery in front of vibrant backgrounds, she transgresses traditional forms of biased representation of Roma women and reclaims the defining moment of identity and story-telling too often assigned by non-Roma, as historicised and perpetuated by dominant culture. In depicting these everyday female heroes, Mehmeti cultivates both a sense for the past as well as a feeling for the future. These portraits are vehicles to remember and unearth suppressed Roma forms of knowledge on strategies for reproductive health or the preservation of mental health and healing practices in general as well as Roma wisdom on nature and the cosmos. In memory and embodied experience of these pasts, the portraits also serve as a reminder for the elders in the community that hold and pass on this knowledge. In her vibrant and brilliant visual vocabulary, Farija Mehmeti enables thus a look through time in honouring the past and offering ways of continuing to imagine the interdependencies and inseparability of existence in community while offering doors into making new futures. On this occasion, the library is activated through Adjacent, the mobile knowledge device conceived for RomaMoMA by artist Daniel Baker. 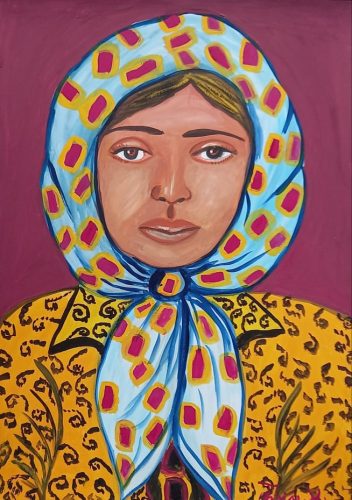 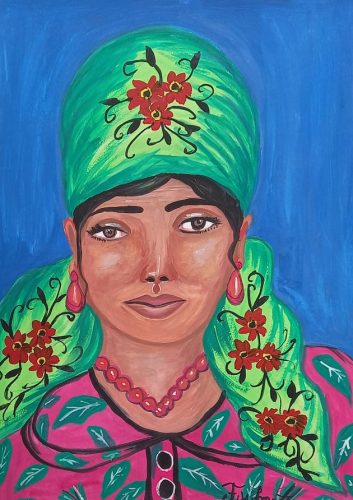 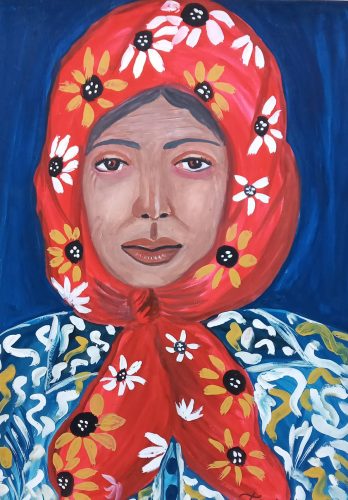 Farija Mehmeti (*1987 in Prishtina) lives and works in the village of Lepina, Kosovo. In her painterly practice, Mehmeti portrays Romani women clad in traditional, colourful fabrics and by that both showcasing and preserving Roma culture and heritage. Farija Mehmeti has exhibited her work amongst others at the Oda Theatre, the Kosovo Art Gallery and the National Gallery in Prishtina.

Daniel Baker (*1979 in Kent) Baker is a Romani Gypsy artist, researcher, and curator. Originally from Kent, and currently based in London, his work is exhibited internationally and can be found in collections across the globe. Baker earned a PhD in 2011 from the Royal College of Art, with his dissertation, “Gypsy Visuality: Gell’s Art Nexus and its Potential for Artists”, after previously earning an MA in Sociology/Gender and Ethnic Studies from Greenwich University, and a BA (Hons) in Fine Art from Ravensbourne College of Art and Design. Baker has contributed to numerous exhibitions, held various residencies, and curated several commissions. He previously worked as an exhibitor and consultant for the first and second Roma events at the International Art Exhibition of La Biennale di Venezia – “Paradise Lost” and “Call the Witness”, which took place during the 52nd and 54th International Art Exhibitions of La Biennale di Venezia, respectively. In 2018, hosting an open call for curators, an international jury consisting of Professor Dr Ethel Brooks, Tony Gatlif, Ángel Vargas, and ERIAC management selected Baker to curate the Roma Collateral Event at the 58th La Biennale di Venezia. Baker’s work examines the role of art in the enactment of social agency, through an eclectic practice that interrogates contemporary art discourse and its social implications via the reconfiguration of elements of the Roma aesthetic.

This library is not a classical library that exclusively collects and preserves books and knowledge in order to make them accessible to the public. Rather, it is an open and dynamic library, based on a body of materials built with the help of ERIAC expertise, further developing and changing over the course of being shown in exhibitions, events, in interaction with the visitors and the hosting institutions.

The library is a “study room,” where everyone can come to read, discuss and comment on texts, a space where new forms of knowledge arise in collectively.  In line with emancipatory educational approaches, the RomaMoMA Library critically reflects the white, Western canon and expands it with postcolonial theoretical perspectives and voices from the Global South and diasporic communities.

More information on the project and activities will follow. 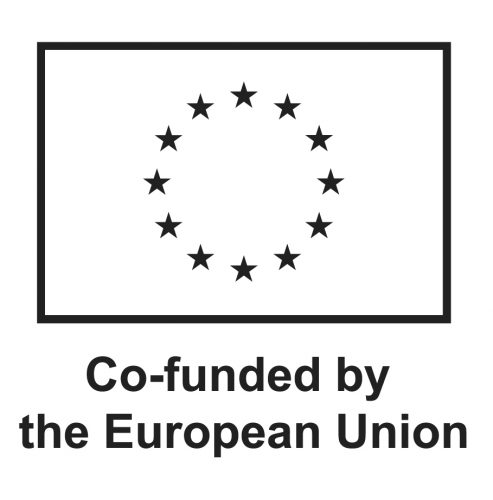