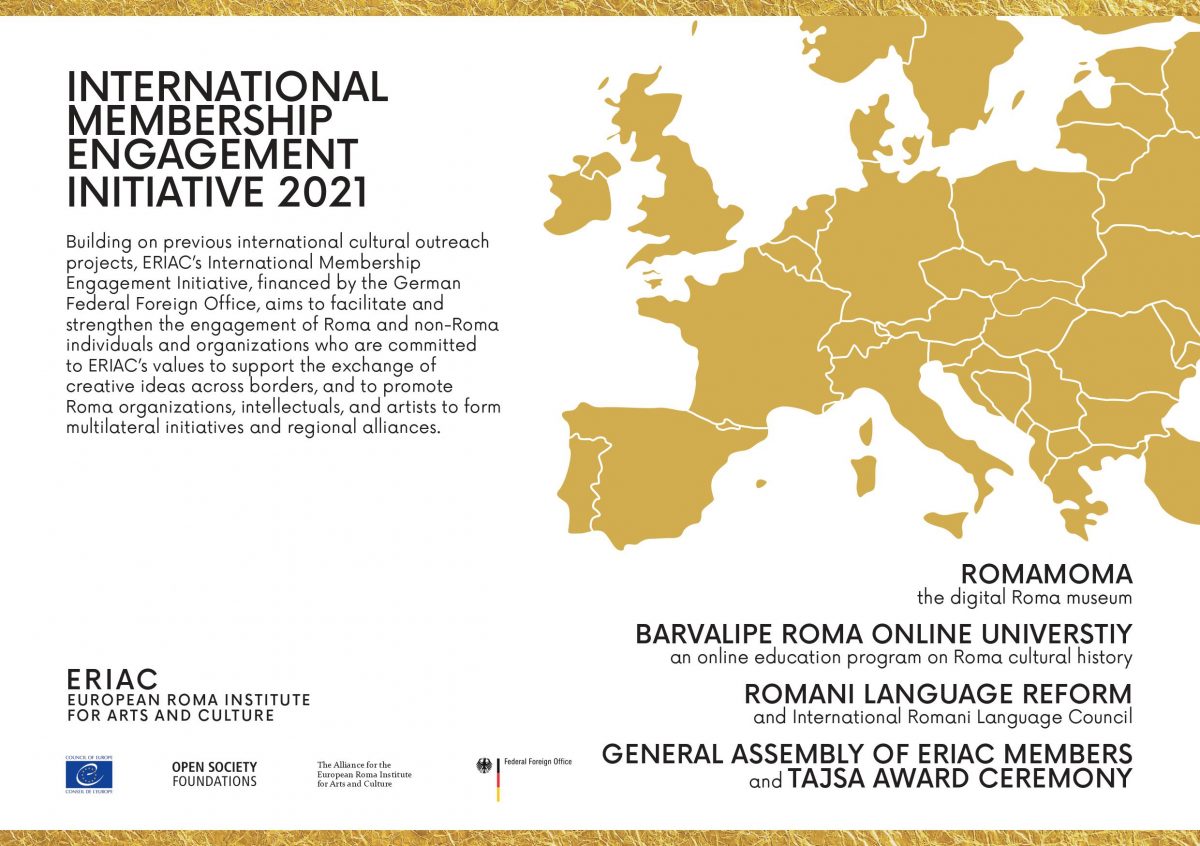 The INTERNATIONAL MEMBERSHIP ENGAGEMENT INITIATIVE, financed by the Federal Foreign Office of Germany (FFO) is an ERIAC initiative to build on the results of the international outreach projects 1-4, to facilitate and strengthen membership engagement. ERIAC conducts the international cultural outreach programs for the recognition and promotion of Roma arts and culture with the guidance of the ERIAC organs (membership, Barvalipe Academy, Board).

RomaMoMA is a contemporary art project initiating a forum for collaborative reflection on a future Roma Museum of Contemporary Art, with the involvement of local and international, Roma and non-Roma artists, cultural experts, social scientists and the civil sphere. RomaMoMA is a joint initiative of the European Roma Institute for Arts and Culture (ERIAC) and OFF-Biennale Budapest. In the form of a contemporary art project, by means of involving stakeholder communities, and exploiting the possibilities of collective thinking and discourse, as well as the critical and discursive potentials of contemporary art,  it – “prefiguratively” – “creates” itself: an imagined and yet real space that is home to both the Roma arts and artists. The suffix in the title, “MoMA” (Museum of Modern Art) is a reference to the prototype of art museums, and it emphasises the dominant role of museums in processes of canonisation, as well as the lack of self-representation by minority groups in museum collections.

Barvalipe Roma Online University is an online educational platform where Roma and non-Roma can access authoritative knowledge about the Roma identity(ies), history(ies) and culture(s) through a collection of high-quality lectures delivered by leading Roma scholars. Launched in 2020 by the European Roma Institute for Arts and Culture (ERIAC), the Barvalipe Roma Online University became a referential and innovative digital space which promoted Romani knowledge production and fulfilled a need for a fair and accurate curriculum on Romani arts, history, and culture. The inaugural course “Introduction to Roma Cultural History”, streamed between September 2020 and February 2021 included 19 online lectures and involved over 60 Roma and non-Roma scholars.

In 2021 ERIAC launched the second course of Barvalipe Roma Online University, “European Roma History”. Starting in September 2021, through weekly lectures delivered by leading Romani scholars, the course traced the local Roma histories in European countries and the Americas and reflected on the future of Roma communities in Europe. Weekly premieres were be followed by live discussions with distinguished Roma and non-Roma historians, scholars and public figures. Lectures were provided in original local languages with subtitles provided in English and Romani language.

A critical turn in Romani Studies, requires a process of decolonization and an evaluative reframing of our current bibliographies. The Barvalipe Digital Library of Critical Romani Scholarship addresses, in part, a need for a rigorous, scholarly resource that collects reliable academic literature and research about the Roma and other related communities, developed from the critical perspectives of Romani scholars.

The initiative contains efforts towards an international Romani language reform, through building on the existing results. For continuing the international work on the development of the Romani language, ERIAC brought together international experts with proven experience in the field, facilitating cooperation at international level and setting up common strategies and standards. In 2020 ERIAC created the first edition of the Romani Language A1 textbook, in 2021 in the framework of the IMEI initiative we collected relevant feedback on the language book from experts in the field, Romani teachers, universities where Romani language is thought. In the framework of the project we organized the Second International Conference “Safeguarding Our Romani Language” on November 5, 2021 (online).

General assembly of all ERIAC members and Barvalipe Academy members for evaluation and strategy building and awarding the second TAJSA PRIZE to an outstanding Roma individual. TAJSA of Roma Heritage is the culmination of the outreach project, ERIAC’s fifth cycle of international programming funded by the German Federal Foreign Office.  After organizing complex, hybrid (online and offline) and multifarious projects, ERIAC invited the growing associate membership, partners and collaborators to conclude the outreach project and contemplate its impact on Europe. The Tajsa Prize, awarded to an outstanding Roma individual enriching Roma arts and culture, embodies the philosophy of ERIAC and the spirit of Roma history and cultural heritage while looking onwards, shaping and re-inventing forms of Roma cultural expressions for the next generation.

The winner of the second Tajsa Award is Zita Moldovan. Watch the full ceremony here.

In 2021 ERIAC opened it’s office in Belgrade, Serbia. This component of the project creates space for exchange of know-how, exhibitions, expertise between the ERIAC Berlin and Belgrade offices, the membership engagement of the Balkan countries and the ERIAC programming focusing on the area being coordinated from the Belgrade office. Watch a short video about the Romani Chib exhibition here.