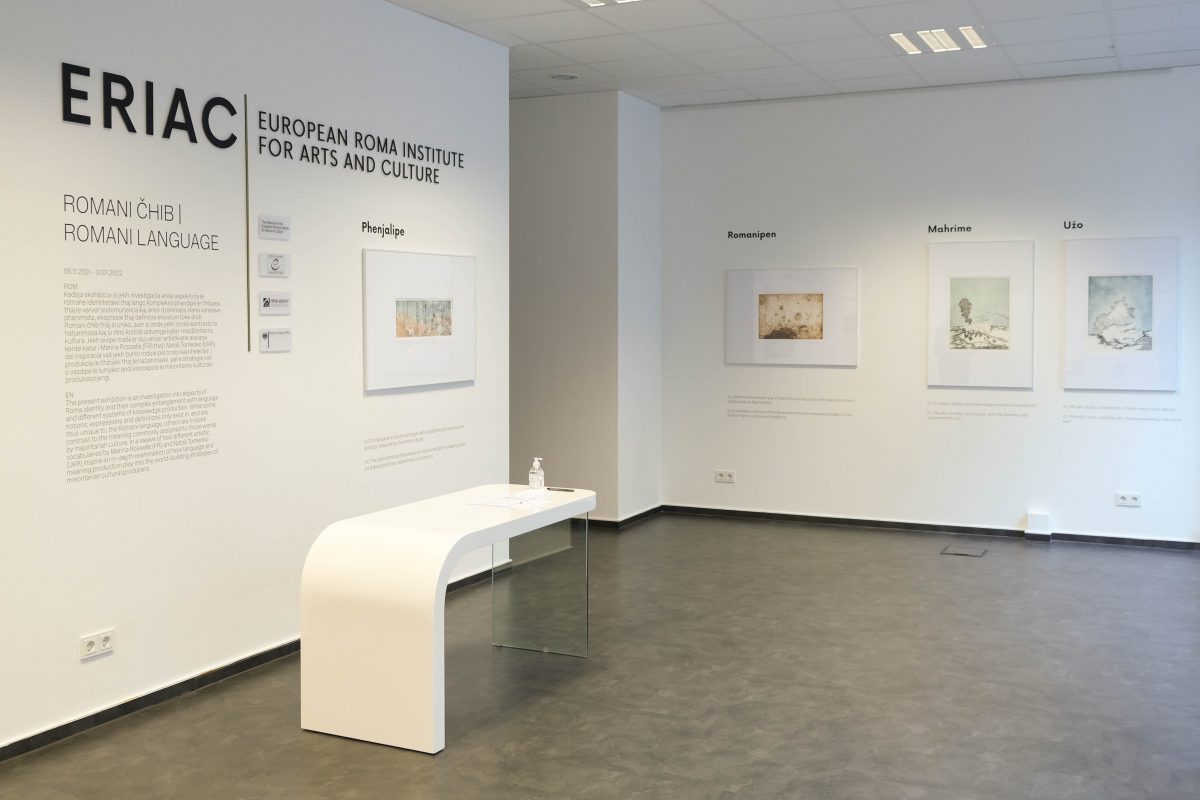 The ADJACENT design concept marries the barcode of a book from the RomaMoMA Nomadic Library with a functional object. In this case, ADJACENT is a white mobile table painted with black lines to form the barcode of We Roma: A Critical Reader in Contemporary Art. The concept title refers not only to the parallel lines that form the code, but also symbolises the act of standing side by side with our collaborators in our fight for equality.

This ADJACENT concept stems from my interest in the relationships between the embodied and the virtual, and the representation of objects and ideas through abstract motifs and symbols, such as barcodes, crochet patterns, etc. It also draws upon the multifunctionality that underpins much of Roma material culture and, by necessity, Roma life. The dual functionality of the object, a table that also acts as a portal through which to access information regarding a particular publication via the barcode, emphasises the interplay between the intellectual and the domestic / between Roma knowledge and Roma daily life.

I co-edited We Roma: A Critical Reader in Contemporary Art in 2012 with Maria Hlavajova. Its contents include contributions from Bonaventure Soh Bejeng Ndikung (Director of SAVVY Contemporary) and Tímea Junghaus (Director of ERIAC and co-founder of RomaMoMA). By scanning the barcode visible on the ADJACENT table with their smartphone, the visitor is, in theory, able to access the information about the book, thereby channelling the agency of the artist (myself), the host (SAVVY), and the catalyst (ERIAC) through a convergence of the virtual, the physical and the cultural to highlight the spirit of cross-cultural collaboration that lies at the heart of RomaMoMA.

The ADJACENT design concept represents the first in a series of functional objects that can each relate to a particular book from the collection. As well as activating links beyond the physical, ADJACENT also offers the opportunity to focus attention on specific elements of the Nomadic Library, depending upon the geographic or contextual location of its presentation. 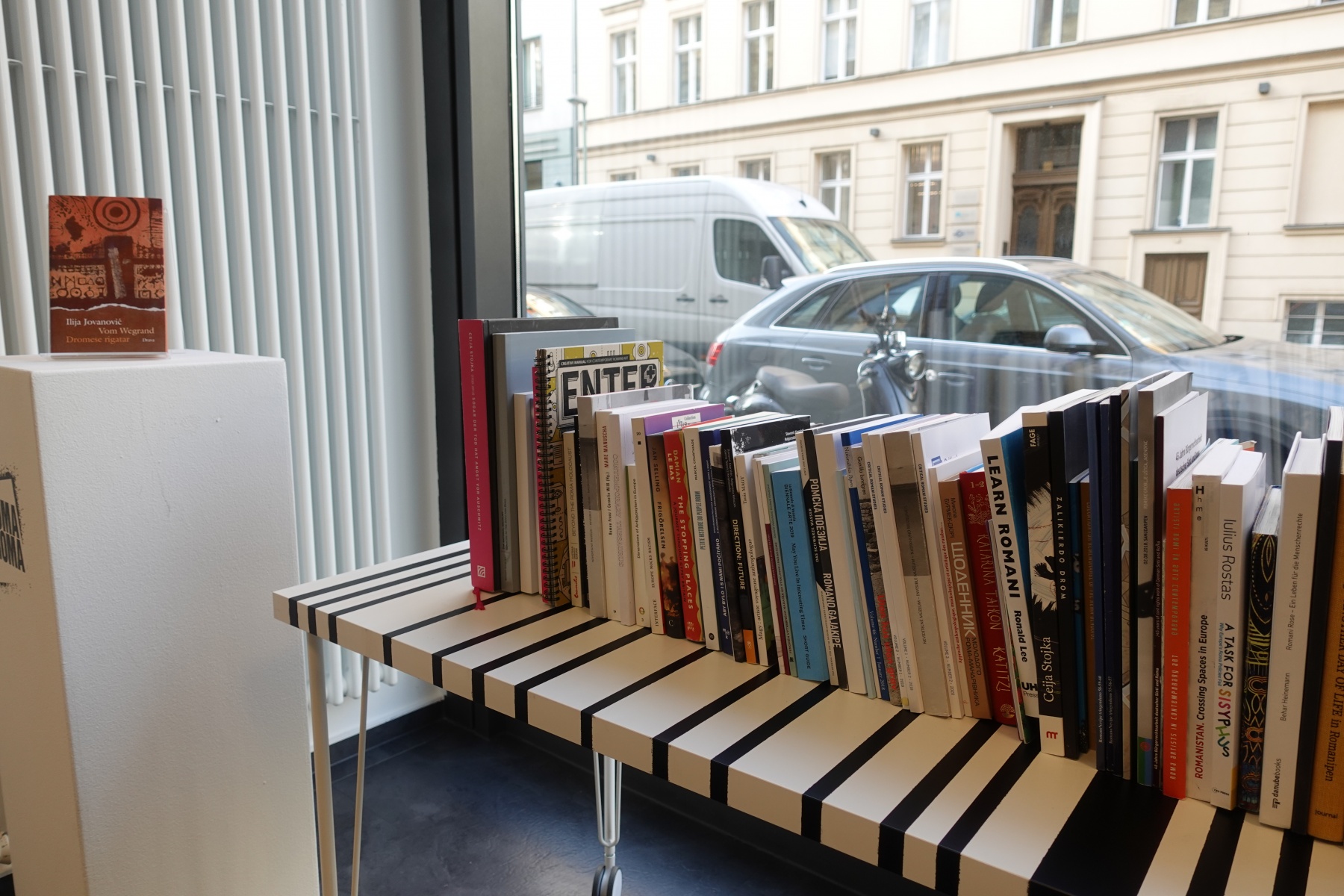 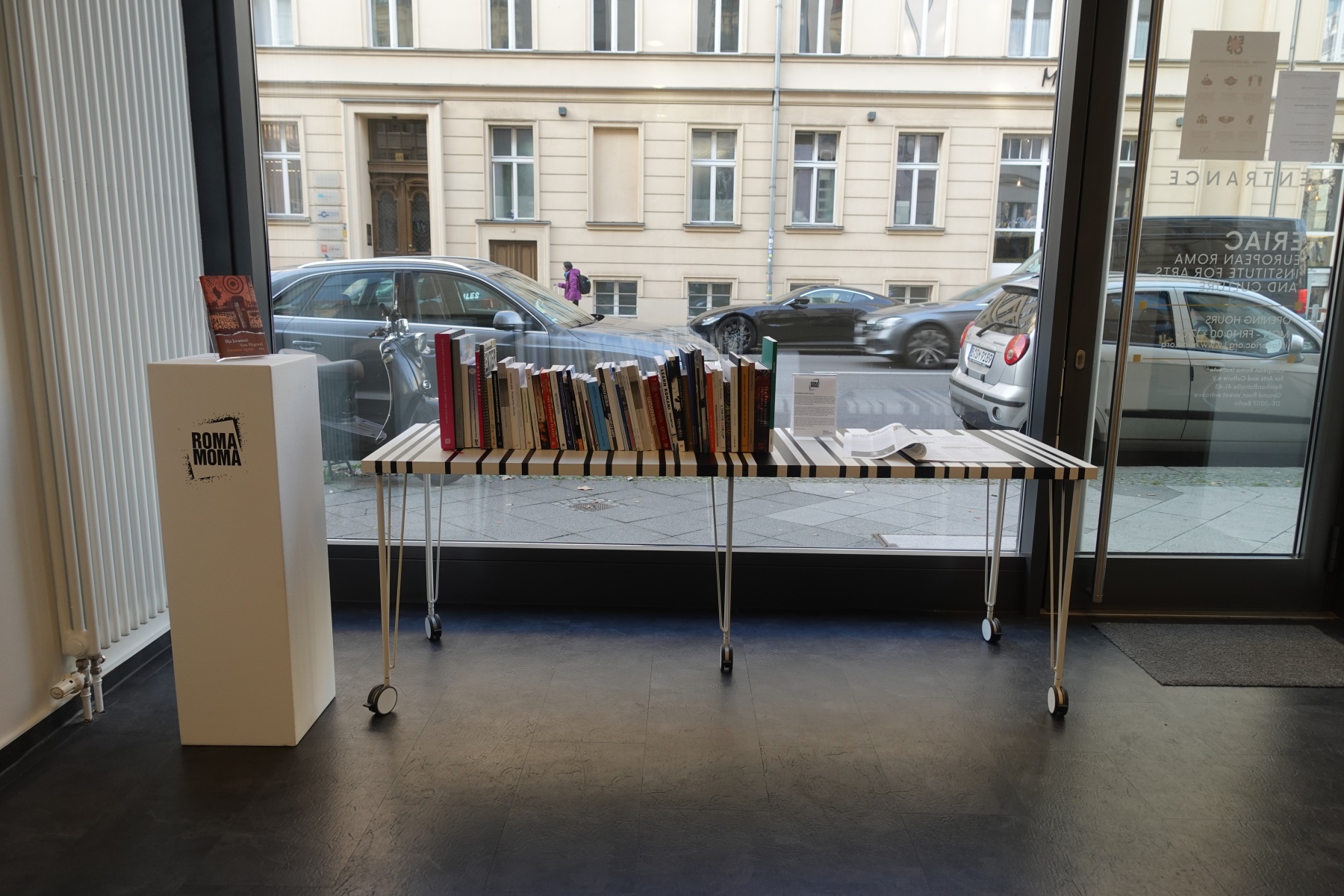 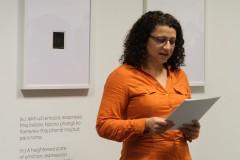 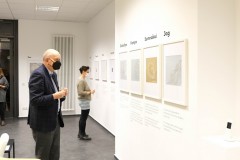 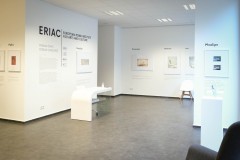 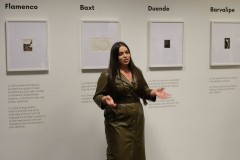 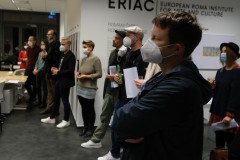 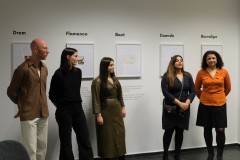 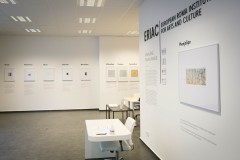 Marina Rosselle (1980) lives and works in Lille, France. She obtained her MFA in 2003 from Valenciennes School of Fine Art and Design, after initially studying art history. She was awarded the Prix de la Fondation de France in 2007 and the Prix Galerie for her exhibition Mulhouse 005, given by Galerie RX (Paris) in 2005. Between April-May 2006, she was granted a Mobility Art Process Residency during the festival Okuparte in Huesca (Spain) by Pepinieres europennes pour jeunes artistes. Her solo exhibitions include the Festival Dedans – Dehors (Inside – Outside) at Collectif 12 (Mantes La Jolie, France, 2011), Vade Mecum at Villa Myosotis (Dunkerque, France, 2008), L’appat du grain (The Lure of the Grain), La Malterie (Lille, France, 2008), and Urbanité par défaut (Urbanity by Default) at Galerie RX (Paris, 2006). Her work has been shown in recent group exhibitions, including: Roma Resistance and Resilience at ERIAC (Berlin, 2021), Grow at Galerie Kai Dikhas (Berlin, 2020), Spratii de Supraviefuire at the Faculty of Architecture in Bucharest (Romania, 2016), and Akathe Te Beshen: J’y suis, j’y reste at 59 Rivoli (Paris, 2016).

Her artistic method is linked to her family history. Marina Rosselle is part of the so-called ‘People of Travel’, from the French ‘gens de voyage’. This lifestyle is characterised by the multiple spaces they cross and by successive appropriations. Such places – discredited or disregarded – are generally those that will ultimately be transformed by urban development. Having herself lived in places that some might not even consider ‘places’, she felt it was important to describe those spaces which she has inhabited and which continue to play an important role in shaping her identity.

Her work refers to a direct perception and personal experience; it is a work designed to oppose condescending or indifferent views of this way of life, and does so by presenting a landscape that contains its own poetry. Recuperation and appropriation are pivotal activities of the scrap-metal merchants she frequents. She operates in a similar fashion, recuperating and bringing together. What seems important to her is that, in collecting objects this way, she herself is required to move about – even perhaps above all – within places that are not picturesque. This involves paying close attention to objects and materials of the most humble,
most unusual kind.
The idea of vulnerability and perpetually changing matter is important; both help anchor the work in the ephemeral, insecure activity of pottering and tinkering.
www.marinarosselle.fr

Nataliia Tomenko (1994 Kremenchuk, Ukraine) is an artist and Roma activist. She completed her MA in Cultural Heritage Studies: Academic Research, Policy, and Management at Central European University in Vienna. She additionally holds an MA in Graphic Design from the Kharkiv State Academy of Design and Arts. Currently, she is working at ERIAC: European Roma Institute for Arts and Culture as an intern, engaged with a range of responsibilities in programing and administration. In parallel, she is working as a board member and a Creative Director at ARCA: Agency for the Advocacy of Roma Culture in Ukraine. Tomenko is also a National Volunteers Coordinator and Roma Rights Defender at the European Roma Rights Centre in Ukraine on a volunteer basis, with the aim of supporting the principal’s work in defending the human rights of Romani people across Europe and fighting against digital anti-Gypsyism. In the meantime, she engages with the visual representation of Roma history and culture, in the framework of art projects connected to Roma cultural heritage and Roma Genocide.