Ya es hora – Now is the time

and bringing it to life with its own dynamism

to make the viewer feel all the emotion of an idea

the whole emotion of an idea

that is the synthesis of my artistic aspiration.” 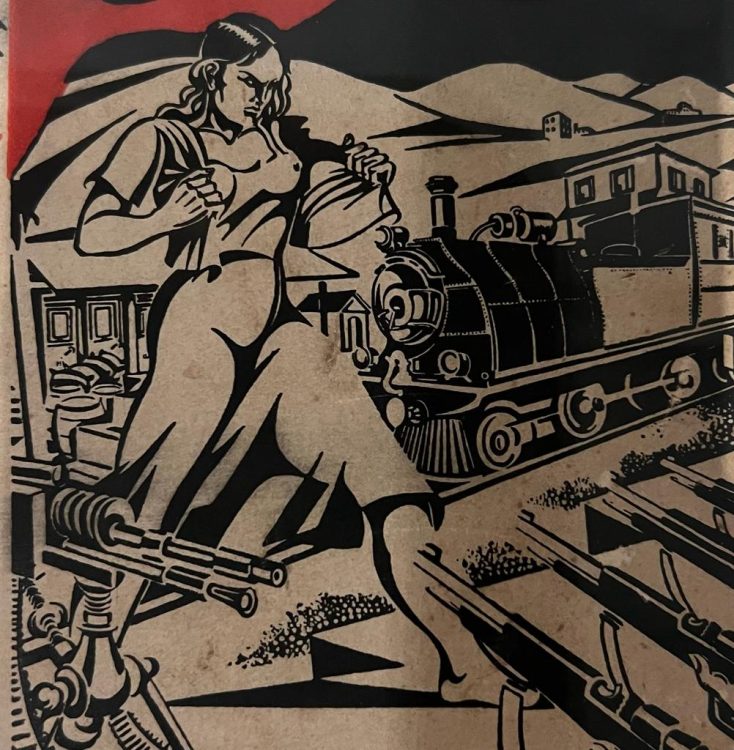 The exhibition, Ya es hora – Now is the time, presents 18 prints by the Andalusian Gitano contemporary artist, Manolo Gómez (Spain, 1967). The black and white abstract works are a continuation of his experimentation with non-figurative expressions, and a conscious manifestation of a personal political and identity strategy, transforming the substance of Gitano Flamenco into painterly compositions. Romani and Gitano communities understand Flamenco as an art form of resistance, with the flow of knowledge, creativity and life energy expressed in multiple genres, including dance and music, but also in visual art, theatre, literature and design. Gomez hit upon an ingenious translation of the Flamenco of the Gitanos into a pictorial language of forms, gestures and textures.

Gómez takes inspiration from two master protagonists. The first analogy to his creativity in exhibited series is Francisco de Goya’s (Spain, 1746 – France, 1828) 80th and final print of the graphic series, Los Caprichos – The Incursions. With this print, Goya turns for the first time to printmaking, as Manolo Gómez does in this exhibition, considering the power of the multiplying technique of prints in influencing the masses and disseminating social and political criticism during his era of 18th-century enlightenment.

The second master to whose art Gómez pays tribute is Helios Gómez (Spain, 1905 – Spain, 1956). Helios Gómez believed that the highest form of painterly expression is abstract art, which can simply convey emotions in the audience, but he subordinated his aspirations to the political cause in the Anti-Fascist struggle and created a large oeuvre of political graphics and printed Anti-Fascist propaganda. His powerful and courageous critic of Fascism, and his humanity and sensitivity towards the victims of Fascism (including the Romani people) made him a target of the first Spanish dictatorship. He was forced to leave Spain and continue his work from Paris, Brussels, Amsterdam, Vienna, Moscow and Berlin from political exile. 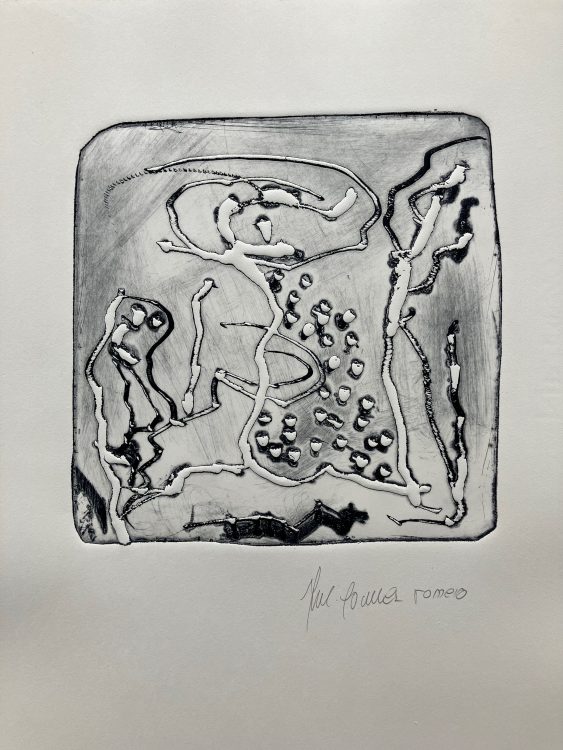 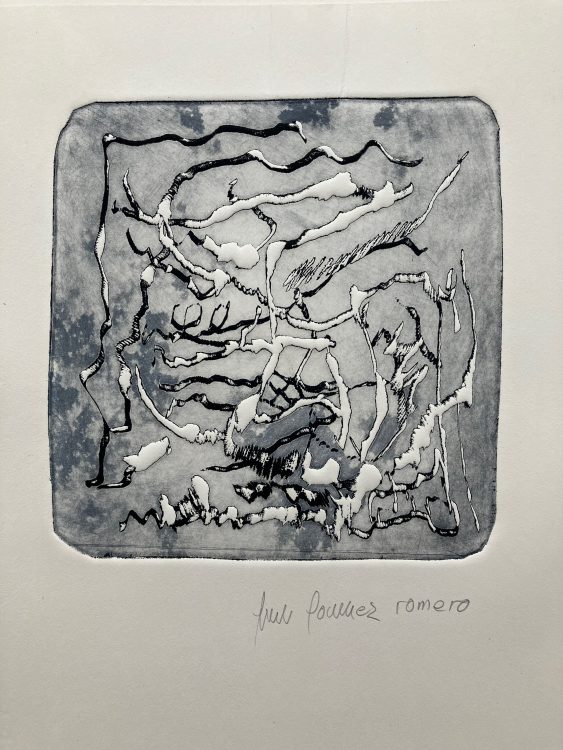 “This exhibition of etchings may come as a surprise, as I have created only a few black and white works in the more than 30 years I have been painting. Those familiar with my career know that colour, along with overlapping lines that are almost always in black, is the way I usually capture emotion on the canvas. I have never been drawn to drawing. However, I have long been fascinated by the technique of etching and the mystery that surrounds it, and I couldn’t help but try it out now that I have the opportunity.

The works I am presenting for this exhibition are etchings because they were made by pressing the paper in a press. The use of thermoplastic material for the plates has allowed me to preserve the imprint of the drawing stroke, but above all the work consisted in preparing the colours or inking of the plates to transfer the pictorial work onto the paper. The works produced in this way are in fact unique pieces and are not numbered.”

Manolo Gómez Romero (Spain, 1967) has lived in Barcelona, ​​Spain, since 1989. He has been an artist since 1992. He exhibits regularly in Spain and Europe.
As a child, Gómez was fascinated by the patterns that formed in the dripping lime on the floor when his mother whitewashed the walls of the house. He could immerse himself in the endless shapes of the blobs and splatters and be completely immersed in them. These structures continue to play a role for the artist in his work. Born into a Roma family with a long flamenco tradition, Gómez began painting under the influence of his wife Joana Artigas. Their father Joan Gardy Artigas and grandfather Llorenc Artigas worked as ceramists with artists such as Pablo Picasso, Joan Miró, Georges Braque, Marc Chagall and Alberto Giacometti. In the Artigas studio, Gómez first learned to work with ceramics, later he devoted himself to painting.

With his gestural, musical and calligraphic style, Gómez has found a suitable artistic expression for flamenco and added a facet to its culture with abstract art. The winner of the Premio de la Cultura Gitana 2012 succeeds in successfully transferring and further developing the enigmatic “spirit” of flamenco, the duende. In addition to painting, poster design and ceramics, Gómez also works on relief-like structures that sometimes appear in his paintings. The artist succeeds in liberating flamenco from its seemingly constant forms and giving this unique and intense culture a convincing and clear form that breathes new life into it in the context of contemporary art.

Even if his works are abstract, there is a certain attitude with which the autodidact Manolo Gómez encounters life and the world. Sometimes, says the artist, they also show what it means to be Rome. With his works, Gómez tries to find a contemporary form for the age-old emotional world of Spanish Roma culture and to express something like the inexpressible state of duende between audience and artist through vibrations, an abstract vocabulary and dynamic colors. Gómez’s work has rightly been compared to the quejío, the sound of a specific song from cante flamenco (flamenco singing).

The exhibition “Manolo Gómez . Ya es hora – Now is the time” is part of the project “Dias de Ira – Days of Rage – Helios Gómez returns to Berlin” by Álvaro Garreaud and Moritz Pankok, funded by HKF Hauptstadtkulturfonds , IMPACT Förderung 2022 and Stiftung Kai Dikhas and in cooperation with ERIAC European Roma Institute for Arts and Culture and Stiftung Kai Dikhas.