All the Birds are Praying for our Children. Exhibition Opening. 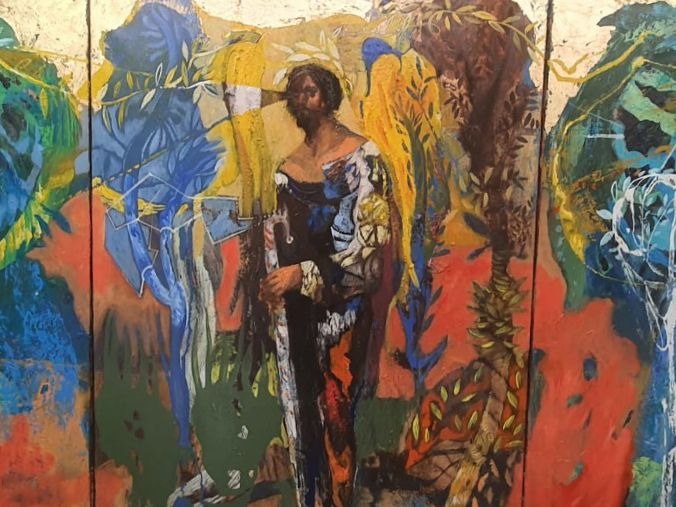 We are here. We are everywhere. Europe would want to contain us, to control us, to destroy us. And still we survive. We survive. In multiple acts of resistance, we care for our children and our elders; we care for each other; we hold onto our love and our family. We are still here. The long history of Romani people in Europe is at once the longue-durée of world history. As Europe collected its Others through violence and genocide, as it girded its loins and militarized its borders, still we survived. Through eviction. Through enslavement. Through expulsion, deportation. Through imprisonment. Through expropriation and appropriation. Through genocide. Still, we survived. Our survival is our resistance; it is the hope of the future and the story of the past. It is constant, and it is our constant, our touchstone, our living proof.- Ethel Brooks, RomaMoMA Manifesto 2022

The question of how art continues to exist and function after the experience of the Holocaust is a major theme in both art history and philosophical thought. Within the artistic/creative practice of Roma artists – those born after and before the war, and the witnesses and survivors of the Holocaust – several directions have appeared, indicating both the presence of the trauma of the Holocaust, and the impossibility of rendering it through the current means of expression. There is no clear precedent for any one mode of depiction, and different generations of artists and viewers have advocated a wide range of expressive tendencies.

Each year, August 2nd marks Roma Holocaust Memorial Day – a day of official remembrance for Romani victims of the genocide, which took place during the Second World War. ERIAC Serbia joins the #RomaRemember action to commemorate all Roma victims of the Holocaust on Roma Holocaust Memorial Day with an art exhibition. This exhibition of works by Sead Kazanxhiu, Farija Mehmeti, and Zoran Tairović celebrates the Romani people’s resistance, resilience, and healing.

In mainstream culture, the history of Romani suffering is overshadowed by a socio-political anti-Gypsy consensus enabling continuous and systematic discrimination of Roma. The exhibition interrogates the potential of re-writing the testimony of trauma, pain, haunting experience of loss, dislocation, and silence into a liberating discourse of healing and hope.

Sead Kazanxhiu’s giant Nest (2012-2022)- evocative of swallows’ nests – reminds us that despite the changing regimes and shifting hierarchies, what we perceive as ‘marginal’ has always been there, has always built its own homes and shelters, proposing new ways of belonging and enacting change. Roma have always nurtured their own alternative knowledge and ways of being together, and we can still learn from these practices today.

Farija Mehmeti’s series Roma Women (2012-ongoing) displays a multifaceted mosaic of imaginary characters to contemplate and honour the everyday heroism in the struggle for existence of ordinary Roma women. These portraits are vehicles to remember and unearth suppressed Roma forms of knowledge on strategies for reproductive health, the preservation of mental health, healing practices in general, and Roma wisdom on nature and the cosmos. In memory and embodied experience of these pasts, the portraits also serve as a reminder for the elders in the community that hold and pass on this knowledge.

Zoran Tairović’s ouvre blames industrial modernity’s worship of rationality for marginalizing Romani people along with alternate forms of knowledge such as the imagination and the unconscious. Tairović aims at exposing the strategic erasure of the Romani Holocaust from the collective memory of genocides that happened in Europe in the 20th century.

The exhibition is organized within the framework of the Manifesta 14 Prishtina, evoking Donna Haraway’s concept of the “Chthulucene” highlighting the inextricable linkages between humans and other-than-human species. Kazanxhiu, Mehmeti and Tairović share the vision of healing as a type of embodied orientation or engagement with the world, which has the potential to reach across boundaries of the skin, honouring the past and offering ways of continuing to imagine the interdependencies of existence in a community. Additionally, the artists offer new doors into developing a more liveable future. While art cannot save our people from the ravages of daily living or historical contingency, it can summon us forth and reconnect us to ourselves as a living force.

The title of the exhibition comes from the poem by Papusza „Tears of Blood”, in English translation by Yala Korwin.

The texts of Vladan Jeremic and Raino Isto about Sead Kazanxhiu, Timea Junghaus about Farija Mehmeti, and Vladan Jeremic about Zoran Tairović served as a point oif departure for this text.

The project is implemented within the framework of Manifesta 14 Western Balkans project and is co-funded by the European Union.

One response to “All the Birds are Praying for our Children. Exhibition Opening.”