The PROUD ROMA TALENT competition concluded last week and the much-anticipated announcement of the winners took place on 8 December, live-streamed from the ERIAC General Assembly celebration in Berlin.

This year, all European self-declared Roma were eligible to apply with video submissions in MUSIC, DANCE and all other PERFORMANCE genres to show the world that Roma identity is plural, diverse and rich. ERIAC received over 250 submissions from 18 countries. ERIAC published 161 eligible videos and engaged over 2.5 million viewers online, making this one of ERIAC’s highest-visibility events to date.

The process of selecting the finalists was carefully navigated, taking into consideration a number of criteria. First ERIAC gathered the top 21 videos by public selection based on the highest online views. These top 21 videos – 7 for each category – were then ranked by the expert jury based on technique, execution, creativity, originality and overall performance. 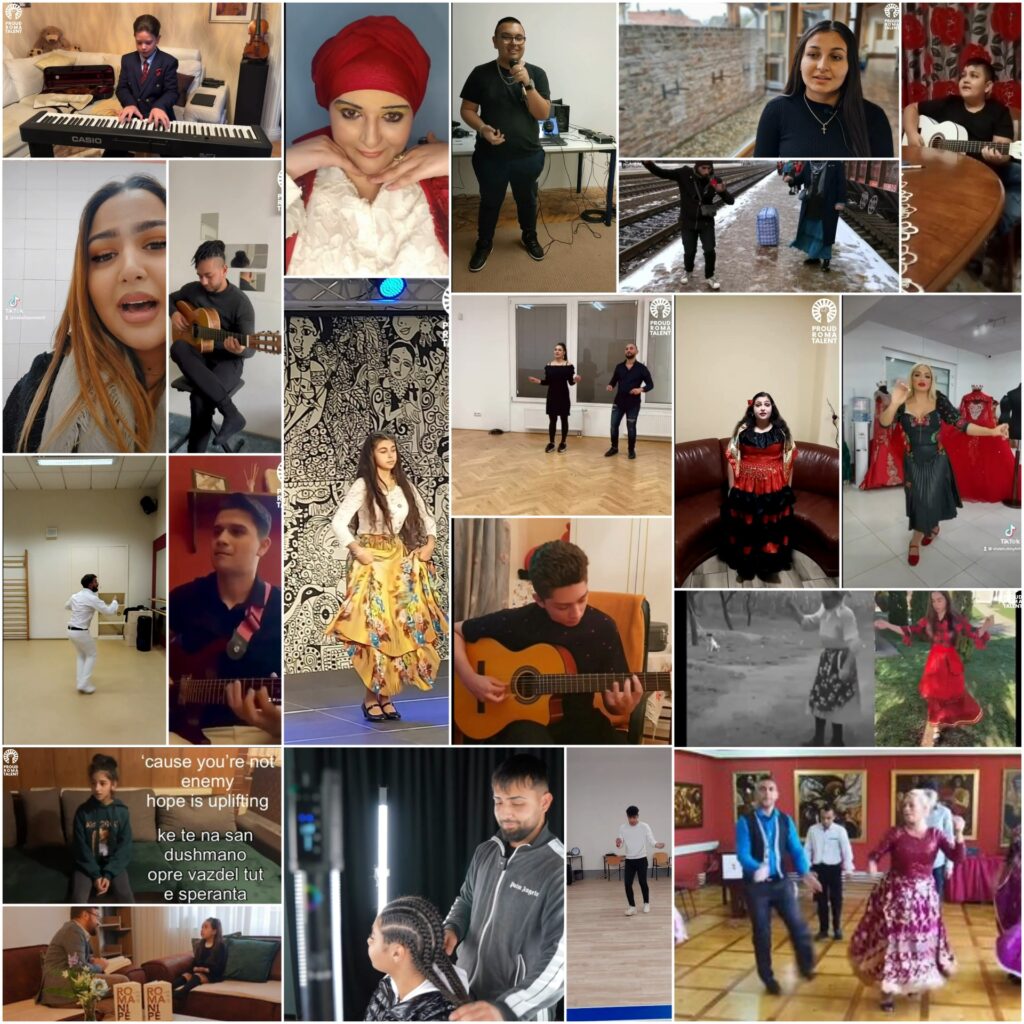 This year, to award the 1000-euro Special Prizes, ERIAC and the international jurors were joined by representatives from three national teams of the PROUD ROMA, FREE EUROPE network – Opre Roma Srbija, 1Hungary Initiative/Roma Sam, and OPRE ROMA Kosovo – whose members chose their winners from the top most-viewed videos in their respective countries.

“The jury deliberation process was ethically sound. Each juror ranked the videos independently and then had a meeting to discuss the initial numerical rankings. We were critical, careful and fair, and factored into the decision the national juror rankings, feedback and comments too. The strength of the process lay in the jurors’ individual expertise and experiences to ensure that we adhered to the highest artistic quality,” summed up the jury.

Timea Junghaus, executive director of ERIAC and Bratislav Mitrovic of ERIAC Serbia first announced the Serbia Special Prize winner on behalf of Opre Roma Srbija. The award went to Zoran, whose “ornamentation, pitch and command of emotion at such a young age” wowed the audiences and judges.  According to the jurors, “Zoran is a child prodigy whose distinctive voice needs to be nurtured”.

Bela Racz presented the Hungarian Special Prize on behalf of 1Hungary Initiative and Roma Sam. The Hungarian team selected their winner from among the top 10 most-viewed videos from Hungary. The competition was huge, as there were altogether 76 submissions from Hungary – the highest number from any other country in the competition.

The Hungarian Special Prize was awarded to Regina Karolina Nemet. “Regina’s creative and skillful representation of the importance of honouring our elders is unique and inspiring. It is clear Regina carefully studied the archival footage which served as the basis of her well-executed performance. She embodies past-present-future and scored high on the creativity, originality, and intention of her performance.”

In an effort to reach younger audiences, ERIAC also introduced a TikTok Audience Award this year. Eligible applicants who submitted their videos via TikTok (i.e. who published their videos on TikTok with the hashtag #proudromatalent and sent the TikTok video link in the application form) were competing for the prize. The award went to Carlos from Hungary who won the 500-euro TikTok Audience Award with a total of 3592 likes.

After the Special Prizes, the hosts finally revealed the top three winners.

“Viven performs a traditional Romani dance with vitality, joy, ease and improvisation as well as superb technical abilities. She put thought into the surrounding space, and through the dresses, is referencing the gatherings where these dances usually take place.”

Natasha Osman from North Macedonia came in second place and won the 2000-euro 2nd prize. The jury was especially impressed by Natasha’s voice, “her conscious and flawless ornamentation as well as her beautiful and emotional interpretation of Ederlezi”.

The 3000-euro 1st prize of the PROUD ROMA TALENT competition went to Lacika Duka from Hungary. “Performing Liszt’s La Campanella – famous for being one of the most difficult pieces ever written for piano – Laci exhibits artistic consciousness and incredible, precise technique, especially remarkable for his age.”

Congratulations to all the winners!

Having received so many excellent applications, the jury decision-making was especially difficult this year; 104 videos alone were submitted in the music category.

“Making decisions in competitions is always a challenge because you don’t know the people behind them. We as a jury have done our best to be as fair as possible and thoroughly discussed each shortlisted video. Although not everyone could win, we see this competition as an opportunity to regain visibility for the Roma community; social media presents an opportunity to show Roma arts and culture to people who have no other means to access Roma cultural heritage but on their mobile phones. It can be educational for both Roma and non-Roma alike,” concluded the jury.

On 16 December, ERIAC presented the Special Mention Awardees from among those contestants who did not make it into the top 21 shortlist but wowed ERIAC with their talent.

Due to the high participation of exceptional young talents this year, Special Mentions were awarded to 3 contestants who “despite their young age exhibit incredible skill and spirit, and whose striking passion and dedication to their craft are truly inspiring”.
Alexandra Bogdan from Romania:
Hunor Mocsel from Romania:
Penelope Tordai from Hungary:
Once again, the entire ERIAC community would like to congratulate ALL the participants for showing their pride and showcasing their amazing talents. We look forward to seeing everyone shine on the ERIAC stage and beyond!