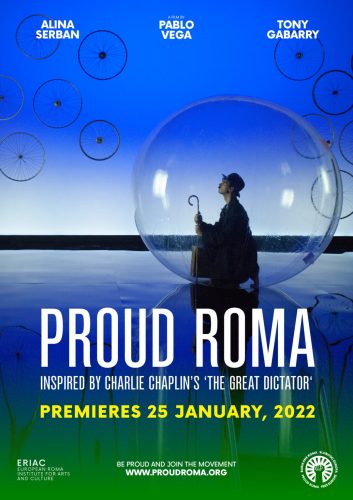 Inspired by the 1940 film The Great Dictator – created by and starring Charlie Chaplin, who unbeknownst to many was of Roma origin – Proud Roma reflects the richness and diversity of the Roma nation. The film challenges dominant historical narratives and negative stereotypes of Roma – Europe’s largest ethnic minority and a nation without borders – while recalling the many cultural and historical contributions Roma have made to Europe over the centuries. Proud Roma is a contemporary Roma manifesto and a tribute to Roma pride and cultural heritage.

Director Pablo Vega’s work has been screened at film festivals worldwide. In 2010 he premiered his documentary Romnia. Roma women from Huesca, a portrait of four Roma women living in Spain. His latest work Proud Roma features a full Roma cast, with award-winning actress, playwright and director Alina Serban from Romania playing the lead role. A pioneer in Roma feminist political theatre, Alina embodies the role of the Roma dignity; Charlie Chaplin’s character is portrayed by dancer, choreographer and actor Tony Gabarry from Spain.

Launched earlier this year by ERIAC with the support of the Open Society Roma Initiatives Office (RIO), and run in partnership with a transnational coalition of national Roma grassroots organizations as well as the Roma Education Fund (REF) and the Roma Entrepreneurship Development Initiative (REDI), the Proud Roma Free Europe campaign seeks to inspire pride in Roma identity and encourage Roma civic participation.

The international premiere of the short film Proud Roma will take place ONLINE on 25 January, 2022 at 20.00, followed by a roundtable discussion with the film creators.

Duw to the worsening COVID situation in Germany, we have made the difficult decision to cancel the “Proud Roma” physical premiere in Berlin in Kino Bablyon on January 25 2022. With the current COVID situation in Germany, we can no longer ensure the smooth execution of the event in a safe and responsible way. The premiere will now take place virtually.