“I believe stories can change the world”

There are some films whose impact is so profound, whose message is so clear, that the best thing any director or actress can do is pay homage to them and hope that some of their magic will rub off. A new short film by Spanish Romani director Pablo Vega and Romanian Romani actress Alina Serban has taken one of the final scenes in Charlie Chaplin’s 1940 film The Great Dictator as inspiration and given it a Romani reinterpretation. The result is a powerfully moving campaign film intended to persuade many of Europe’s 12 million Romani citizens to proudly declare their ethnicity in many of the national censuses taking place in 2022.

Chaplin was open with his family about his Romani heritage, but like many of us, he may also have felt a need to hide it (See The Romani Roots of Hollywood’s Greatest Icon). Not so Alina Serban. The 34-year-old Romanian Romani actress has steadily built a career by confronting racism and hate. In 2019 she received the first-ever Tajsa Prize from ERIAC to recognize her outstanding contribution to Romani Cultural Heritage. Whilst preparing to stage the first-ever biographical play by a Romani woman at Bucharest’s National Theatre, Alina took some time out to speak about Proud Roma. 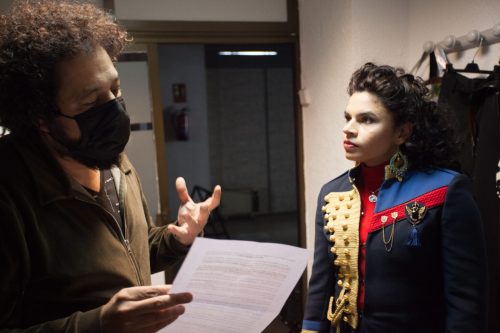 I asked Serban why it was important for her to support the Proud Roma Free Europe campaign. “As a Roma ‘artivist’, I pioneered Roma theatre in Romania and I even put my family in danger for putting myself out there in such a public way,” says Serban. “In 2009 it wasn’t at all cool to be a Roma publicly, so being part of this campaign is something I would always support.”

Like many fighters for equality, Serban had already seen Chaplin’s performance of what has been called “the greatest speech ever”. She says “I thought it was such a great message to speak out loud against hate. I cannot express how important those anti-hate messages must have been back then. No one can even describe how it must have been to create that moment in time.”

“I am surprised that we haven’t broadcast this message before. We need these messages and campaigns. Roma stories should invade the public space! In our past, we have centuries upon centuries of hate. We don’t have enough time even within one lifetime to overcome these campaigns.”

The Great Dictator was released in 1940 when right-wing dictators were in power in many European countries. It poked fun at Hitler, but the Proud Roma campaign has a perhaps more difficult to reach target – the stigma and shame that stops many of Europe’s 12 million Romani people from openly declaring their ethnicity. The invisibility leads to much fewer and worse public services the community needs to thrive.

This year many postponed census campaigns, in which these social statistics are recorded, will be restarted across Europe. With so many having been taught to hide our identity and feel ashamed of it, I asked Serban why Roma should declare who we are? What’s in it for us? She says: “Life is very short. Once you try to forget who you are and forget your roots, the richness that comes from your blood and culture, it’s as if you are cutting something from your own flesh and blood.”

She added: “I do completely understand that so many Roma people are defending their families by not teaching them the Romani language, and by trying to fit in and by becoming whiter. I myself did not want to be a Roma because I felt so much rejection and so much pain. It makes me sad to see even my nieces today facing bullying at school. But I’m turning my head over to the people who can really speak about their identity because this can really make a difference for their children’s children.”

“I really encourage all the Roma to know that what we are is not something bad. We are first of all humans with our qualities and our faults. This is what the universe gave us, this global identity is what makes us unique in our own way. We shouldn’t hide this. We should tell this, especially to the young people, that their skin is not something to be sad about, but is something to celebrate,” says Serban.

One of the film’s most powerful techniques is that it uses positive attributions to say who the Romani people are rather than what we are not. In it, Serban reminds us that we the Romani people are family, peace, resistance, courage, culture, justice, hope, freedom and love. I ask Serban what personal associations she has with all those qualities. She thinks instantly of her mother.

“In my own life, all of these words have been the foundation of my self, my own trajectory. My mum is the most courageous, resistant person. Even in the hardest times she still fought for justice because she had hope that one day we would live in peace. She is love. I myself in the last 13 years I have had to resist so many things in order to tell Roma stories. But the love for creating change kept me going. The light in the eyes of the people who received my stories or took something from them creates a ripple effect that makes me continue.”

The Great Dictator was a critical and box office success, but Chaplin’s career arguably suffered later because of his utopian politics. At a time when many people are looking to entertainment to just escape, what risks does she see with bringing politics to work?

“If we look at it with a clear vision everything is political,” says Serban. “Every story, even the ones that entertain us are political, it’s just not how they are sold. It’s harder for me to work without exoticizing my own people, but I am only thriving when I am my authentic self. I believe stories can change the world. They can scare people, but really it’s just humans seeing each other’s humanity. Only certain people get to tell stories, with certain faces and narratives. Everything is politics. I am just trying to normalize the Roma humanity and make racism and the stupid exoticism of us not cool anymore.”

So what does she think Chaplin would think of Proud Roma?  She pauses for thought. “I would be very nervous to ever have Charlie Chaplin in the room when I was performing. I just hope it would at least be an OK-ish opinion. I hope he would have his fist up and say “Opre Roma!” That would be great!”. And what does she hope the film and the wider campaign achieve?

“I hope it reaches as many hearts as possible, so that we can have our eyes and hearts open for the humans around us,” says Serban. “There is no way that we can have campaigns against racism and not think about the biggest and most discriminated minority in Europe. There should not be any hate left that is still normal.”

She adds: “Even if one person sees this video and takes some time to reflect before passing quick judgment then we have won. If one teacher tells a Roma student that they can be anything they want to be, then we have won!” 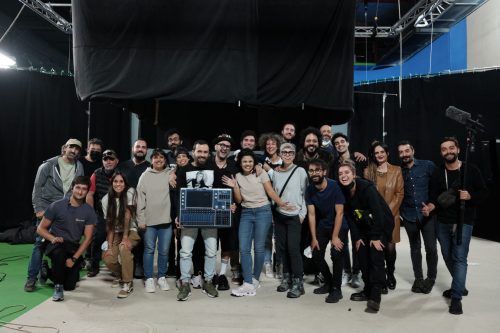