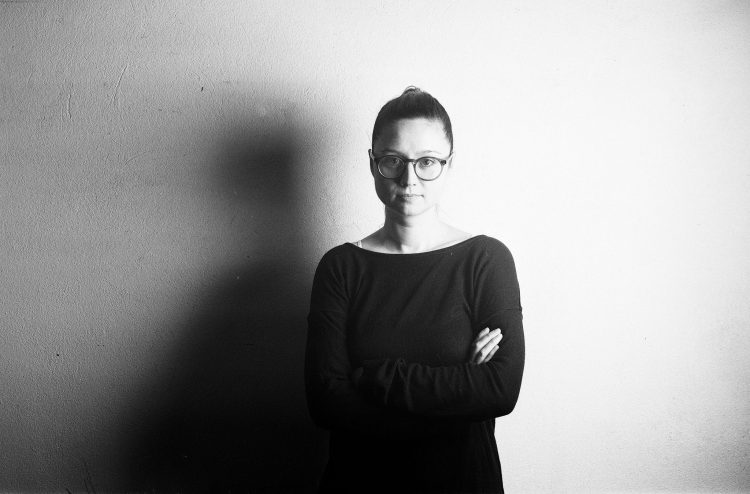 You are both an artist and a curator. How have these two practices influenced each other within you?

Ilina Schileru: It all started with my need to create a community as an artist, and I envisioned it as an artist-led community. That is when I began negotiating for a space in the Muzeul Taranului Roman (Museum of the Romanian Peasant), where the exhibitions and events were intended to begin a discussion around issues of identity, positionality, and subjectivity.

How did you and Eugen Raportoru first meet?

IS: Eugen called me before his exhibition in the Museum of the Romanian Peasant. He told me that his exhibition concerned a wall carpet which portrayed dancing women – women seen as objects of desire, objectified by the male gaze. The image and the object of the wall carpet was something I also had strong ties to. It was also in my focus, working on my documentary photography project after university. For me, it was a memory from my childhood, a decorative element that created a sense of familiarity, of belonging, and it brought me a sense of calm. In my work, I was focusing on the wall carpets that were handwoven by the women in the village where I had spent my childhood; so it struck me as odd when Eugen came with his proposal of using wall carpets and repainting wall carpet themes. Eugen uses wall carpets that came from the East, and which showed images that had no connection with our own social realities; nevertheless, we integrated this imagery. Eugen reappropriates a visual element that nowadays is seen as kitsch, and he reinterprets it as his own.

Why did this strike you as odd?

IS: What struck me was that these carpets were as much a part of my life as his. This is a phenomenon that connects us. I am non-Roma, and Eugen is Roma, and this is a token of commonality that we share, and I love it. It’s something that brings us together.

Were you familiar with Eugen Raportoru’s work prior to your collaboration?

Having this common interest and connection to the wall carpet, could you walk us through the process of how you came up with the curatorial concept for your exhibition in the Venice Biennale?

IS: In the wall carpets, women appear as seen by the male gaze, as sexualised, as “the Other”, an image often projected onto Roma women. The displayed carpets offer an opportunity to open up discussion about these depictions. In his paintings, Raportoru offers a reinterpretation of these images, by rendering them free of any photographic portrayal, turning away from the sexualizing depiction, and creating, in response, a free space to be filled in by the viewer’s imagination. The installations that Raportoru brings to the biennale recreate a space of intimacy, with furniture that bears the trace of time and an environment that invites the visitor to stay, to wander around, to inhabit the space. Inviting the two feminist performance artists and activists, Mihaela Dragan and Alina Serban, into this space transforms this exhibition into a platform where feminist versions of reinterpretation and reappropriation of the image of Roma women are performed. Visiting parts of the installation, they were triggered by it and could relate to it instantly. It seemed to be as self-referential for them as it is for Eugen.

The 59th edition of the Venice Biennale is a feminist exhibition, as its curator Cecilia Aleman has indicated. How does Eugen Raportoru’s installation, Abduction from the Seraglio, fit into this strategy?

Ilina Schileru, Romanian artist, curator and cultural manager, received her MA in Graphic Art from the Bucharest National University of Arts. A member of UAP Romania and founding director of Ebienale, she collaborates with galleries and artist-run spaces in Bucharest. Schileru is programme coordinator of MNTRplusC, a contemporary artist-run space within the National Museum of the Romanian Peasant, showcasing international collaborations between local and international artists and curators, such as Cornelia Lauf, John Cabot University (Rome, Italy); and Piotr Armianovsky (Ukraine), featured artist of La Biennale 2019. Schileru collaborates with numerous NGOs on integrating immigrant and refugee children through art programmes, and is engaged in establishing joint initiatives with other national museums (Museum of Recent Art, MNAR, etc).