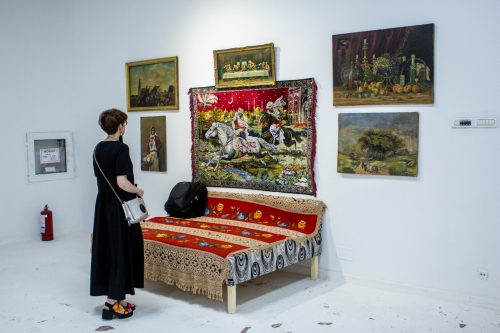 Eugen Raportoru, “The Abduction from the Seraglio”, installation view from The National Museum of the Romanian Peasant, August 2021

Following three previous editions in 2007 (Paradise Lost), 2011 (Call the Witness) and 2019 (FUTUROMA) featuring several Roma artists, in 2022 ERIAC will commission and support the establishment of the 2022 Exhibition.

After a careful review of the curatorial concepts and exhibition proposals the international Jury selected the exhibition project Eugen Raportoru: The Abduction from the Seraglio curated by Ilina Schileru. For the second time as commissioner, ERIAC envisions an exhibition, embodying the highest quality standards in arts and culture, making complete the Venice Contemporary Art Biennale with Roma representation, and resonating across the contemporary art scene, performing a next milestone in Roma cultural and art history.

“The themes involving the oriental wall carpet and household kitsch are chosen as an emotional retreat for visual artist Eugen Raportoru. His choice denotes an assumption, a stance, and a near-political declaration. It is an assumption of an iconography that worked equally in association with Roma culture, as the carpet is a vibrant object par excellence, an ecstasy of the senses through impetuous chromaticism and multi-decorative, that is formally found in Roma iconography starting from the clothing pattern up until the vibrant music. But more than that, it is a clear statement: the oriental carpet makes the main character in Raportoru’s project telling a story of reconversion and re-evaluation (…) Raportoru’s series, The Abduction from the Seraglio, speaks about a time capsule that incorporates a wide range of symbols so strongly connected to a relevant universe of an entire generation.” (Text by Ilina Schileru, Curator) 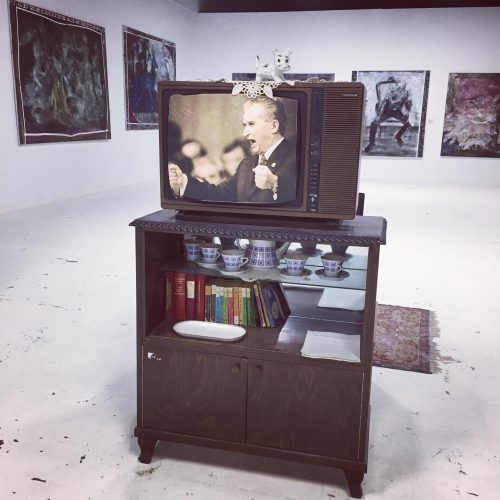