On 16 May 2022, Romani communities across Europe will come together to mark the 78th anniversary of the Romani Uprising in Auschwitz. On that day in 1944, Roma prisoners of the so-called Zigeunerlager at the Auschwitz-Birkenau concentration camp, having heard of the imminent liquidation of the camp, stood up against the Nazi guards armed with only hammers, pickaxes and shovels. As a result of their defiance, no Roma died in the gas chambers that day. The Roma revolt against the Nazis is the only recorded uprising in Auschwitz and is now widely commemorated as Romani Resistance Day.

Last year, the transnational Roma community held Romani Resistance marches across Europe and lit fires as a symbol of determination to keep the flames of Romani Resistance alive at a time when hate speech, violence against Roma and the use of symbols of hate were rising dangerously. In close to 100 communities Europe-wide, the Roma population stood united against the spread of far-right movements and growing antigypsyism.

In 2022, the flames of Romani Resistance are still burning bright! In that spirit, ERIAC and the transnational Roma movement come together this May 16th to demonstrate and celebrate our historic resilience in a series of cultural programs and commemorative activities.

The 14th Edition of Manifesta, the European Nomadic Biennial, will take place from 22 July until 30 October 2022 in Prishtina, Kosovo. Organised for the occasion of the biennial, Manifesta 14 has set up the Manifesta 14 Western Balkans Project to enlarge the outreach and duration of the biennial by developing a cross-regional collaboration platform including a vast array of cultural and civic activities across the region. An integral objective of the project is to open up the Western Balkans, creating a project that breaks the confines of isolated cultural infrastructures and networks.

ERIAC joined the partnership with the Manifesta 14 Western Balkans Project in order to ensure that Roma culture and Roma audience are adequately represented in this important festival. By facilitating spaces for deepening the understanding of different cultures and providing room for participative and creative encounters, Manifesta 14 may, in our opinion, play a pivotal role in connecting people and catalyzing positive change in the Western Balkans and beyond.

On 16 May at 11 a.m. we will hold an expert talk at the ERIAC Space in Belgrade. ERIAC Executive Director Timea Junghaus joined by a group of trailblazing cultural activists from the Western Balkans will discuss the topic of culture as a vehicle for challenging negative narratives about Roma and building bridges with the majority society. 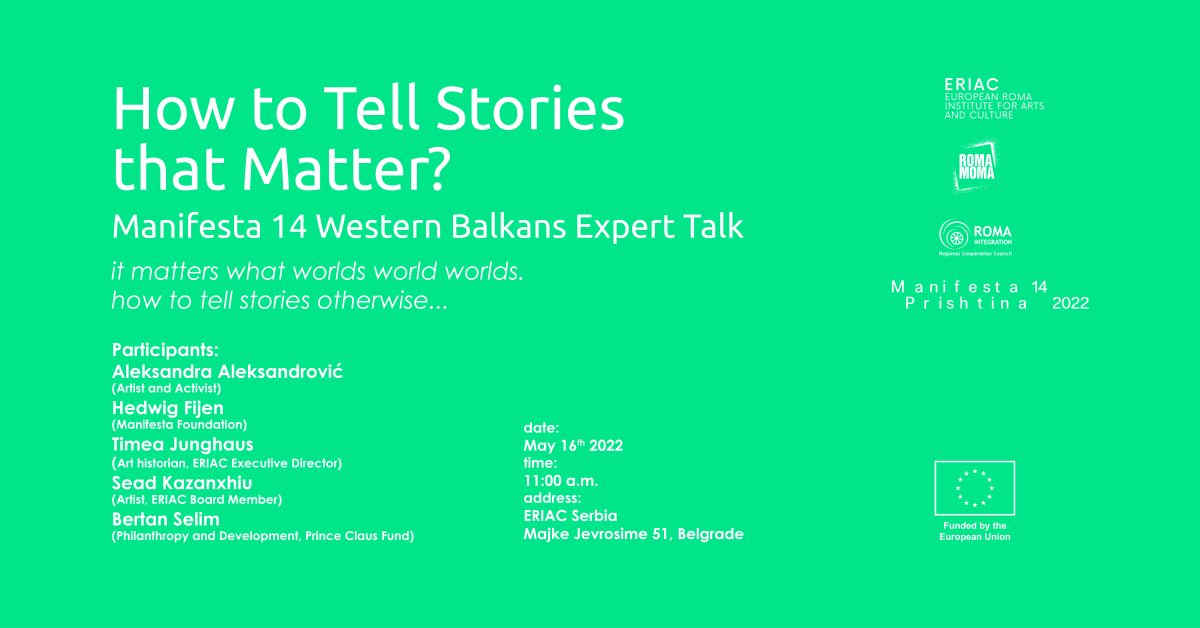 Roma, The Force of Nature

The musical event will combine traditional, classical and modern musical creations to paint the centuries-long journey of Roma from India to Europe, the pain of genocide during World War II and later suffering, and to strengthen the fight of Roma for survival, pride and freedom. The event will showcase magnificent traditional and contemporary Roma music and bring together exceptional performers of Roma and non-Roma origin from Serbia and beyond.

The event is an official start of the “Proud Roma, Free Serbia” campaign – part of a larger European campaign – which aims to strengthen Roma self-esteem and promote the unbreakable ties present in Roma, Serbian and European history and culture during the census year in Serbia. 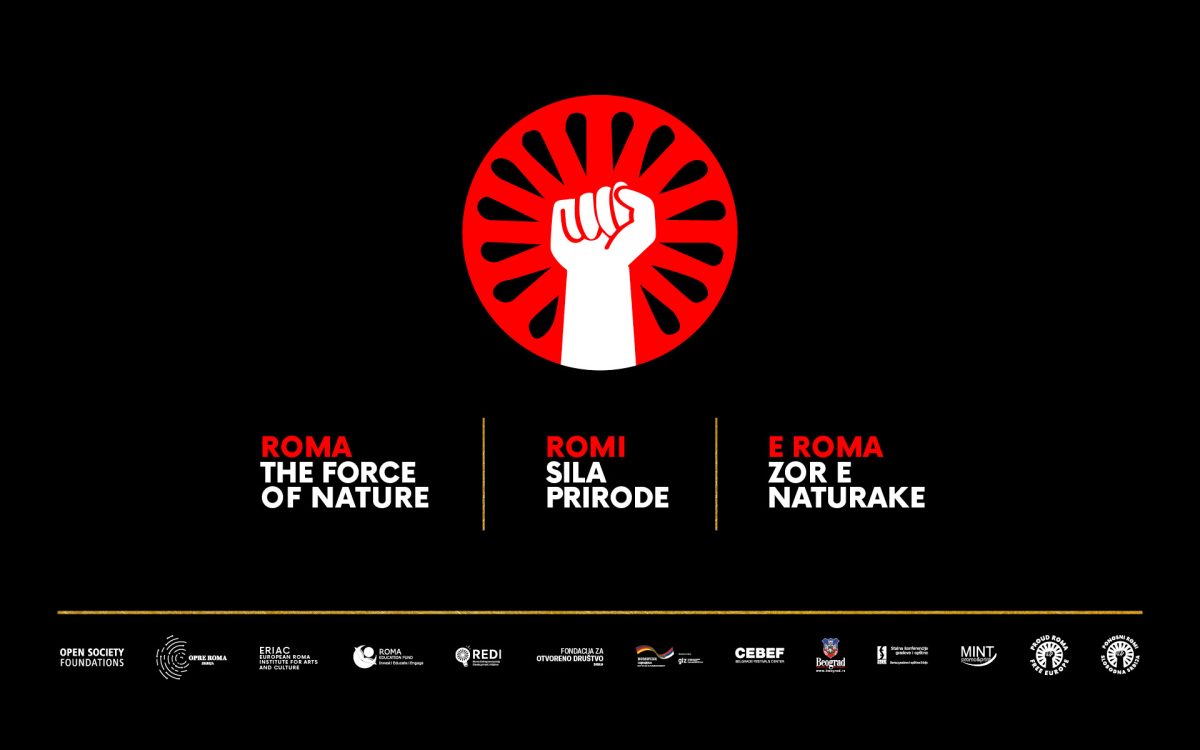 In a collaboration between ERIAC and Villa Romana (Florence, Italy), two artistic residencies are offered to the winners of a public competition. In 2022, Dariya Kanti (1991, lives and works in Tashkent, Uzbekistan) and Luna De Rosa (1991, lives and works in Berlin, Germany) are the young Roma talents chosen for this residency. Featuring the two awardees and Nataliia Tomenko (1994, fled from Kremenchuk, Ukraine and currently living and working in Vienna, Austria), artist in residence for ERIAC in 2021, the exhibition welds together three artistic positions that bring together notions of Roma identity, feminist strategy and ecology while staying true to their specific aesthetics and methodologies.

Dariya Kanti’s surreal, captivating and carefully crafted imagery unfolds into emanating and symbolic icons. They become catalysts for speculative story-telling, referencing oral history and its mode of transmission as an important part of Roma culture as well as creating a specific time-space configuration that allows her to speculate on the future and to develop feminist narratives on womanhood and ecology.

Luna De Rosa’s work explores questions of Roma identity and womanhood and the politics and poetics of its visual representation. She creates stunning and dense images that almost metaphorically follow the friction and clashing realities of ideas connected to being an artist, Roma and a woman in search of a mode of existing in the in-between, of being multiple, of staying irreducible.

Nataliia Tomenko captures the daily life of a Ukrainian Romni (young Roma woman) virtuously using various graphic and printmaking techniques. In linocuts and ink drawings, she creates visual vocabularies that connect to expressions in the Romani language and thereby process and transform key aspects of Roma politics and identity.

Marina Rosselle’s artwork highlights the seasonal work of the Roma-Traveller women. A link with nature which is expressed through the picking of flowers, medicinal plants or during the grape harvest.

It is in borrowing feminist historian Silvia Federici’s reading of the word gossip that these three voices tune in together and resist and build worlds effectively: “In early modern England, the word ‘gossip’ referred to companions in childbirth not limited to the midwife. It also became a term for women’s friends, with no necessary derogatory connotations. In either case, it had strong emotional connotations.”[1]