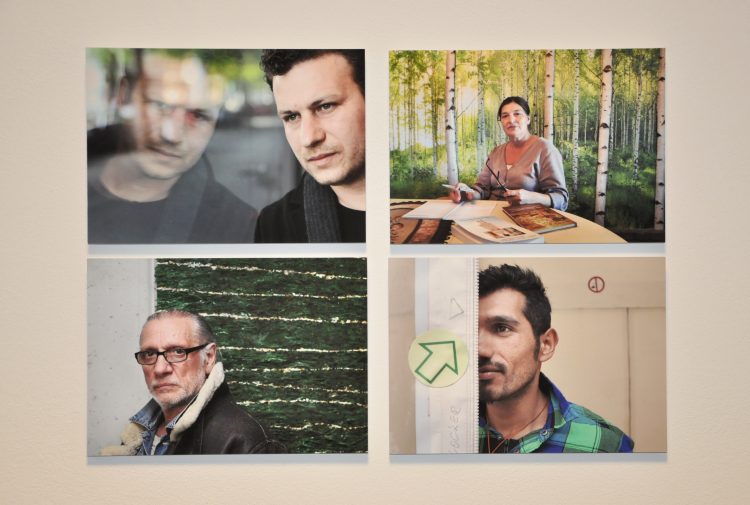 The exhibition Andaro Angluno Vast by photographer Nihad Nino Pušija opened at ERIAC Space in the framework of EMOP on 25 September 2020, and is part of the Roma Components of the German Council of Europe Presidency during 2020.

The exhibition opening was enriched with a speech by art historian Bojana Pejić.

Due to new COVID-19-restrictions, the exhibition was unfortunately forced to close earlier than planned. Please watch the video to get a (digital) glimpse of this beautiful exhibition that we hope to be able to reopen soon!

Photography is the most historically complex and problematic genre to appropriate the Roma subject. Will the Roma ever be able to dissociate themselves from the traumatizing – sexualizing and criminalizing – practices of photographic representation used throughout the history of anthropology and ethnography? Has it become definitively impossible to turn and re-turn the photographic gaze? Since his first exhibition in Sarajevo (1988), the questions sketched out above have been central to the work of artist and photographer Nino Nihad Pušija. He continues to offer new ways to create and perceive authentic images, while dealing with anti-Roma prejudices and their political consequences, such as deportation and assimilation. In doing so, he contributes to the contemporary European art scene’s on-going critical analysis of the role that images of so-called “others” play in the self-image of those portrayed. His series of portraits of internationally known Romani artists and activists is on view for the first time in 2020 at the European Roma Institute for Arts and Culture (ERIAC) in Berlin.

Find the handout of the exhibition here: Handout_Andaro_Angluno_Vast

Nihad Nino Pušija (D/BIH) born 1965 in Sarajevo, Bosnia and Hercegovina, is a fine art photographer. His work (since 1992), focused primarily on documentary and portrait photography, aims to capture Roma identity in Berlin, where he has been based for the past 27 years, and elsewhere in Europe. Important themes in his work include: the politics of recognition, minority positions in contemporary artistic and curatorial practice, south-east Europe, refugees, conflict resolution, integration and the Roma in Europe. His work has received support from nGbK Berlin (New Society for Visual Arts), Museum of European Cultures, and Allianz Cultural Foundation. He was included in both the 1st and 2nd Roma Pavilions at the Venice Biennale 2007 and 2011. Pušija lives and works in Berlin.

Bojana Pejić (D/SR), born 1948 in Belgrade (Yugoslavia, now Serbia), is an art historian and curator. She studied History of Art at the University of Belgrade, and in 2005 she defended her PhD: “The Communist Body – An Archeology of Images: Politics of Representation and Spatialization of Power in the SFR Yugoslavia (1945-1991)” at the Karl von Ossietzky University in Oldenburg, Germany. From 1977 to 1991, she was curator at the Student Cultural Centre of Belgrade University, and organised numerous exhibitions of Yugoslav and international art. She has written criticism since 1971, and was editor of the art theory journal Moment (Belgrade, 1984-91). In 1995 she organised the international symposium, The Body in Communism, at the Literaturhaus in Berlin. Pejić was chief curator of the exhibition, After the Wall – Art and Culture in Post-Communist Europe, organised by Moderna Museet Stockholm (1999), and shown at the Ludwig Museum – Museum of Contemporary Art Budapest (2000), and at Hamburger Bahnhof Berlin (2000-2001). In 1999, Pejić was a co-curator of the exhibition, Aspects/Positions, at the Museum für Moderne Kunst Stiftung Ludwig (MUMOK) in Vienna. She was artistic director of the international exhibition, Artist-Citizen, 49th October Salon in Belgrade in 2008, and chief curator of Gender Check: Femininity and Masculinity in the Art of Eastern Europe, shown at MUMOK and Zachęta National Gallery of Art in Warsaw. She edited Gender Check: A Reader – Art and Theory in Eastern Europe in 2010. She co-curated the international exhibition, Good Girls – Memory, Desire, Power, at the Museum of Contemporary Art (MNAC) in Bucharest (RO, 2013), and HERO MOTHER – Contemporary Art by post-Communist Women Rethinking Heroism (Berlin, 2016). She is guest lecturer at Bauhaus University in Weimar with the course “Public Art and New Strategies” since 2014. She is also currently a Senior Non-Resident Fellow at New Europe College (NEC) in Bucharest (RO, Getty Program), 2018-2021. Pejić has lived and worked in Berlin since 1991.