RomaMoMA Just Do It! B.A.M.N – An Idea for A New Museum 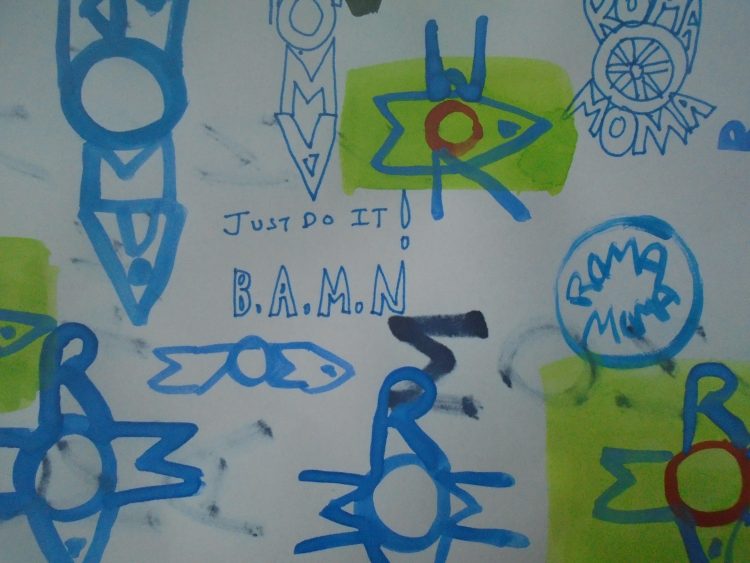 RomaMoMA Just Do It! B.A.M.N (By Any Means Necessary) – An Idea for A New Museum, a blank piece of paper? a constellation of ideas? reactivating a concealed memory?

The image accompanying this text is a rough set of drawings, ideas for a motif, maybe a layout for a building which I was thinking of while composing this written piece. I feel RomaMoMA as an idea, as a new museum that will be different for whoever is thinking about it, whoever is imagining it, what it can possibly be, the elements it could contain or be made of; it could exist within such variable spaces, and could also possess magic, could be so many things; the possibilities are infinite, and why can’t they be? For now, it is a blank piece of paper on which anything can be created and imagined. Because the definition of the word magic is: to do, and this is all we have to do: just do it by any means necessary, in whatever formats and spaces that we can. RomaMoMA Just Do It! B.A.M.N. (By Any Means Necessary)

This is just how I think about it, just one idea… and why couldn’t RomaMoMA be a constellation of ideas?

I often revisit a book that I have in my vast library: Lost Magic Kingdoms by Eduardo Paolozzi. This book accompanied the exhibition of the same title created by Eduardo Paolozzi at the Museum of Mankind (now closed) in 1985. The cover depicts many objects, including artworks by Paolozzi, which merge together to form an installation and to quote:

An Idea for a New Museum

Where in an old building preferably an abandoned cathedral even a gutted one a selection from the history of things the choice of material being an art form. The arrangement & juxtaposition of the objects & sculptures suggesting another philosophy. Fakes combined with distinguished reproductions copies of masterpieces both in painting and engineering the radial engine & a Leger painting Bugatti wheels cinema prints crocodile skulls all parts moveable: an endless set of combinations a new culture in which way problems give way to capabilities.[1]

This is a handwritten text in the book, written in capital letters by the hand of the artist. Ideally, that is how I like to present things, and in fact, I have scanned my notes/drawings for this written piece, should anyone wish to see them as an alternative to this usual type of text presentation. (I am also producing an upcoming audio version). There are many doorways to access information, and the written, or even the typed word is only one, coming from a community where the oral tradition is so strong. I truly believe we have to make works available in as many formats as possible. The book accompanied the exhibition, and, as stated on the back cover, illustrates the artist’s belief in the power of museum collections to stimulate new directions of thought and creation. The contents of this new museum are summarised within the last sentence: an endless set of combinations of a new culture, in which problems give way to capabilities. It is important to read and to put this into practice. This sentence should be a starting point for a RomaMoMA. For so long, we have been “the Gypsy Problem”, with so much emphasis put on Roma Inclusion. Why do we not empower and enable ourselves from our position of adversity, which we have always had to overcome, not letting our capabilities be overshadowed and downplayed by the status quo of the dominant society. Our radical diversity, our positions across the planet, our ingenuity should enable a combined new cultural way of making our capabilities visible. Creativity out of necessity, out of artistic ability should be celebrated and all of these positions shown. This exhibition by Paolozzi and many of the ideas behind it was ahead of its time, with many museums only now starting to address this. A RomaMoMA should present and create an even more discursive conversation about “re-activating a concealed memory”,[2] as this is what we are in most museums and cultural institutions: a concealed memory, hidden artworks and artefacts in basements, non-representation in most major institutions, still being seen as nameless subjects and portraits. A RomaMoMA needs to express and combine all of the facets of a culture that has been concealed yet capitalised upon by majority society. We have been looted and pillaged with our cultural capital exploited, we must and should redress the balance, but from the very soul of who we are as people, and what we have to express creatively. We need to acknowledge our (Un)Acknowledgements, to quote Dr Ethel Brooks.

An idea for a new museum, a RomaMoMA should not repeat the mistakes of what already exists, and could possibly present a new way for various forms of artistic and cultural production to be seen and experienced. Imagine the use of the digital with the real to combine printed versions of Roma masterpieces, reproductions alongside the artistic productions of a local group of artists and makers. Costumes and garments not only exhibited, but embodied in the visitors and participants, food prepared and shared, oral history exchanged, language and dialects spoken, music played, songs sung, a film watched, all in the same space, large or small. The daily life, the artist, the culture combined, not elite, not in the sanctified art space, but in the everyday space, in real time, in virtual time. A museum that transcends the city, the global metropolis, the huge expense, the controlled philanthropy.[3]

The current situation internationally should be seen as an opportunity to start to build and form a multimedia and diversely situated combination of platforms that create a RomaMoMA reflective of our transnational community. Why can it not be virtual, real, in existing spaces, looking towards new spaces, inserting itself into larger spaces, be fluid, flexible, engaging, exciting, mobile, creative? All of the attributes that as a community we share also with many others, and which are now becoming more common with growing numbers of the Earth’s populations.

Constant Nieuwenhuys’ design for a Gypsy Camp in 1957, based on his relationship with the community of Sinti that were based in Alba, and who his friend Giuseppe Pinot-Gallizio let stay on his land, embodies the ideas of flexibility and mobility – both things which most current museums of art lack. The idea of the Gypsy Camp as a reclaiming is stated by Dr Ethel Brooks, in her essay, Reclaiming: The Camp and the Avant-Garde.[4]  Much debate and ideas were generated during the 1950s about displacement, uprooted dwelling, and more openness to “the other” after the Second World War, as well as the ongoing fascination with Gypsy Culture, which had been happening since the beginning of the nineteenth century, and which Constant was a part of.[5]

If we look to Jaw Dikh!, the international artistic residency created and run by the artists Malgorzata Mirga-Tas and Marcin Tas from Czarna Gora near the Black Mountains in Southern Poland, we can see in practice the local within the global. Community, mobility, flexibility, international recognition, not in a sanctified art space. Czarna Gora is a Roma settlement. The artists that attend are Roma and non-Roma; everyone lives with Gosia and her extended family. Food and work spaces are shared together, artistic practice, ideas, stories and biographies also. Exhibitions are planned and curated in collaboration and inserted into other spaces, from a space that is not in a city and not housed in a major institution.

Thus, how do we make this everyday art space become part of a network of spaces that truly reflects a RomaMoMA, to include all the artists that are located across the continents in dispersed communities, and where currently and into the foreseeable future, both travel and the exhibition experience are, and will remain in a state of flux due to the Covid-19 pandemic? To think about a diverse artistic practice that is often outside the accepted canons and city locations of Western Art, and that what is now included within this was not always so, Laboratoire Agit’Art[6] is one example. The avant-garde always precedes the dominant dialogue: not at the same time, not in the present. This means to lead the way, not to follow, to inform, to inspire, to create new modes of thinking. We are still on the fringes of majority society and have survived centuries by relying on our instinct, ingenuity and creativity in order to live. Let us take these attributes forward into the making of RomaMoMA that is both virtual and real.

We have always been the avant-garde and inspired those who have been seen as such. Let us not forget our true potential and step forward to build a RomaMoMA, that truly reflects who we are as a people and our creative abundance. Radically diverse voices, ways of working and locations which need to be seen and heard. We are a patchwork of voices, ideas and visualities – like stars, let us shine: there is not just one star in the night sky: there are many, and they are dispersed across the vastness of the sky. Why can’t a RomaMoMA be based on the same principle and be scattered across this planet, where it can shine into the future to the many – not just to the few.

Delaine Le Bas is an artist. She is currently one of the artists in The Crack Begins, within the 11th Berlin Biennale for Contemporary Art (2020), and Guest Professor at UdK – University of the Arts Berlin.