A Roma Museum – The Promise of a Discursive Space, and a Source of Knowledge 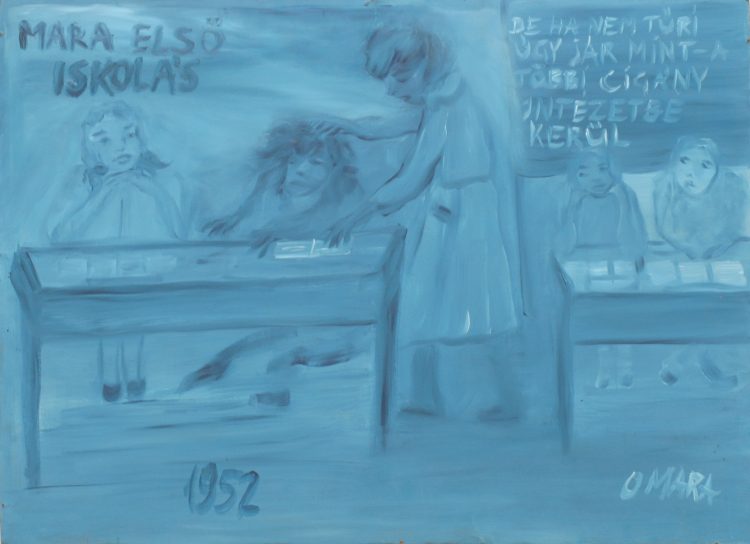 If Europe’s over fifteen thousand museums are truly “democratising, inclusive and polyphonic spaces for critical dialogue”, there is absolutely no need for culturally and ethnically specific museums. However, museums tend to assign Roma the place of the other, thereby reinforcing and eternalising the position of the Romani people and Roma artistic practice to the periphery of European societies. As mainstream institutions fail to “collect, preserve, research, interpret and exhibit” Roma visual and cultural production, stories told through Roma eyes, such as the highly relevant work by Mara Oláh, entitled Oláh Mara: Mara Első Iskolás, 1952 (Little Mara in First Grade, 1952), stay outside the mainstream discursive spaces. Therefore, the authors firmly believe that it is finally time to bring together funding, power, friends and allies to change the way Romani identities, art, history, culture and lives are presented and viewed.

They ask: Do you really need a Roma Museum? – and our immediate answer is no.

In a just society, an institution devoted solely to Roma arts and culture would be redundant. With the newly suggested definition of the museum provided in 2019 by the International Council of Museums (ICOM), it is easy to see why.[1]

Museums are democratising, inclusive and polyphonic spaces for critical dialogue about the pasts and the futures. Acknowledging and addressing the conflicts and challenges of the present, they hold artefacts and specimens in trust for society, safeguard diverse memories for future generations and guarantee equal rights and equal access to heritage for all people. Museums are not for profit. They are participatory and transparent, and work in active partnership with and for diverse communities to collect, preserve, research, interpret, exhibit, and enhance understandings of the world, aiming to contribute to human dignity and social justice, global equality and planetary wellbeing.

It is fair to assume that an institution focusing exclusively on contemporary Roma arts and culture would be rather unnecessary, since surely, at least a handful of institutions among the over fifteen thousand museums in Europe fulfil the above-mentioned criteria.[2]

Unfortunately, this is not the case when examining the representation of Roma arts and culture in Europe’s museums. Museum collections present for the most part a frozen-in-time image of Gypsies instead of the Romani people in their diverse beauty and resourcefulness. Paintings, ethnographic photos, and artefacts portray Roma as musicians, beggars, and women piping, breastfeeding, reading fortunes or seducing white men. Since the Renaissance, with paintings ranging from Hieronymus Bosch and Giorgione to Titian, we often are exposed to the old and consistent topoi of Roma, such as the Gypsy Madonna, which unfortunately have been anchored in European culture. The Roma are portrayed as exotic and dangerous foreigners in art, literature, and theatre as early as the end of the fifteenth century. Digital archives in some of the largest European museums reveal that this visual image of the Roma has remained unaltered. The few exceptions that do exist, such as the Ethnological Museum of Hungary archive that holds a large collection of works by Roma artists, stay in storage due to the unwillingness of the institution to lend them for exhibitions. Even when an institution “holds artefacts and specimens in trust for society”, it fails to fulfil its role as a museum “guarantee[ing] equal rights and equal access to heritage for all people”.

So, they ask us once again: Do you need a Roma Museum? This time we are uncertain. Yes, we want more representation, but we fear replication of the past-eraser and cultural misrepresentation.[3]

We the authors met in ERIAC in Berlin. Without this institution, encouraging a critical discourse on the place of Roma art and culture in Europe, we likely would not have met. We belong to the same generation. We are citizens of the same country, but come from completely different backgrounds. One of us grew up in a Jewish middle-class intellectual family in Budapest, and attended public school without any Roma classmates, despite the school being in the 8th district, where some 40 percent of the population is Roma.[4] The other, herself of Romani decent, grew up in a low-income household, and attended rural schools in Hungary near the Romanian border, with varying numbers of Roma children.

Although differing in economic, cultural, ethnic and geographic states, neither of us encountered any representations of Roma in our day-to-day education. We were not exposed to songs, paintings or poems created by Hungarian Roma. We were unaware of the Roma heroes who fought for the national independence of Hungary during the 1848 Revolution. Not to mention the uprising of Roma families in Auschwitz-Birkenau on the eve of 16 May 1944. There were never annual or special events where we learned about the legacy of the Romani Congress. There were never school trips to museums where we could witness society, arts or culture through Roma eyes. Slavery was discussed in our schools as a matter of Western European and U.S. history, but never in the context of the Romani history. The history of our neighbouring countries, or even our fellow Roma citizens whose ancestors fled to Hungary after the abolishment of 500 years of slavery in Wallachia and Moldavia[5], were never addressed. We never got a glimpse of Roma as creative and resourceful individuals, a part of the art, music, economy and culture in Hungary and Europe. We never knew of those who tirelessly fought and still fight for collective rights, the right to quality education, housing and healthcare, and also, of course, the right to “access [to] heritage”.

It is as if the Roma never existed.

While working in ERIAC, we realised that we both observe similar tendencies in many European countries. We had the opportunity to co-curate and organise international projects in several European countries, including the third Roma Pavilion at the 2019 Venice Biennale. Our goal in each of those projects was to highlight the voices of Romani intellectuals and artists. However, it became evident that these established places designed for “critical dialogue” do not include Roma voices at all.

In this zeitgeist, addressing any and all indigenous, subaltern, or politically discouraged minorities seems to finally be granted an interest in mainstream discussion. This might seem like positive progress that should be encouraged. Yet often when addressing the “Roma issue”, initiatives and institutions appear to abuse the minority group to seem politically relevant or hip and aware of the current debates. The interest in the group then seems disingenuous and comes often with only temporary curiosity. In most cases, museums fail to treat Roma artistic practices as equal partners and instead assign Roma the place of the other, thereby reinforcing and eternalising their place on the periphery of European societies. We personally have observed a range of such behaviours – from exhibitions only welcoming contemporary Roma art for a brief 24-hour run, or imposing unprecedentedly high rental fees for rooms of state-funded institutions to display and discuss contemporary art created by European Roma.

Even after more than five hundred years in the European region, Roma arts and culture is still not being “collected, preserved, researched, interpreted and exhibited”. Consequently, the approximately twelve million European Roma do not have the chance to challenge the deep-seated racialized image of the Roma minority preserved in stories, jokes, films and in the arts.

Therefore, when they raise the question again – if we need a museum dedicated to Roma arts and culture – now we ask them, how could we not?

Museums – based on the definition of ICOM – should offer both a place and a space for intercultural, intergenerational and interdisciplinary dialogue. Museums are places where students, children, parents, senior citizens, tourists and cultural experts walk the same path and find themselves in the same discursive space. Museums are therefore inevitably educational institutions, carrying the promise of offering new narratives, stories, perspectives, and even chances to reflect on the entanglement of our shared histories.

As long as our current institutions fail to “collect, preserve, research, interpret and exhibit” Roma arts and culture, it is inevitable that Roma knowledge, creativity, history, heritage and its entanglement with other cultures will stay outside the mainstream discursive spaces.

Surviving outside of the mainstream means working in the form of resistance initiatives, which takes its toll on both the collective and the individual level. Collectively, these do not provide a constant and varied discussion on the matter, leaving topics underrepresented and ineffective against biases and racism in the long run. Individually, these emphasise long-standing misrepresentation, leaving their mark on the lived experiences of the Roma.

The opportunity to imagine a future museum grants us the possibility to envision a museological terrain open to Roma that could change the status quo. More specifically, this museum could directly respond to the missing and insufficient institutional knowledge about the Roma by becoming a source of information and embracing the public pedagogical mission of the museum as a public institution.

This museum would have the potential to change the way Romani identities, art, history, culture and lives are understood. We imagine a place to explore the impacts of historical and contemporary events, challenging the dominant narratives on the Romani diaspora, telling the stories of Romani heroes and victims, offering dynamic and complex learning programmes, while embracing the bonds and values that define Roma and non-Roma as parts of the same communities.

In order to establish this museum, we need not only funding and power, but friends and allies. RomaMoMA, a project partnering with majority institutions, has the potential to pave the way for a future museum that is not a lonely island, but is rich in meaningful cooperation with communities, art collectives, experts and institutions reclaiming together the places and spaces with Roma to “collect, preserve, research, interpret and exhibit”.

At this point in time, a Roma museum is necessary. It will serve as a discursive space and source of knowledge for other institutions, leading the way to a future where people do not grow up without encountering and discussing Roma history, visual and cultural production in their own surroundings.

They asked us if we need a Roma museum. We answer: it’s about time we got one.

Katalin Németh is an alumna of the Romani Studies Program, and of the School of Public Policy Program at the Central European University in Budapest. She led ERIAC’s Cultural Institutions Network Initiative (CINI) project.

Zsófia Bihari studied Cultural History and Theory in Berlin. She was responsible for the third Roma Pavilion at the 58th La Biennale di Venezia as assistant curator and project coordinator of ERIAC. She is currently working in the field of non-formal historical education.

[1] The cited definition is a suggestion, which has not yet been voted on in ICOM. Therefore, the official definition of the museum provided by ICOM remains the one provided in 2007. Read more: https://icom.museum/en/resources/standards-guidelines/museum-definition/

[3] We would like to take this opportunity to thank Ella Schechter for her critical questions, comments and edits.