When art making is just one part of the story 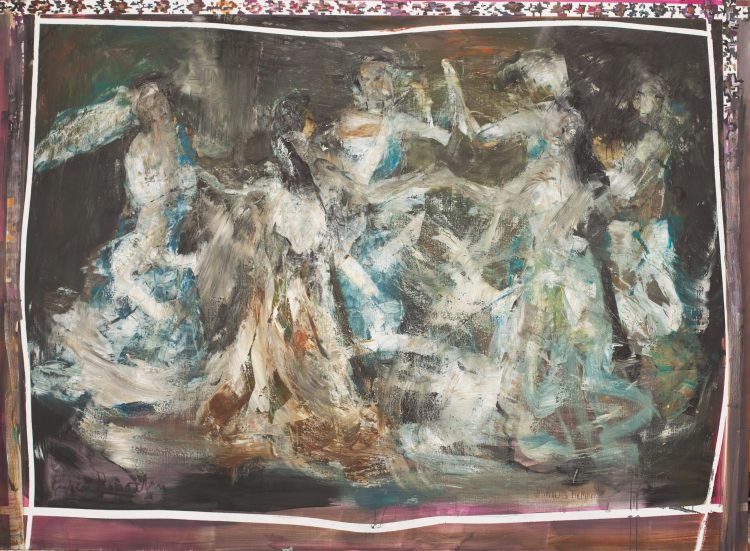 Eugen Raportoru is a phenomenon that cannot be understood outside of the complex circumstances characterising Romanian society and culture of the last fifty plus years. His validation as an artist came late, when other colleagues of his generation were already long on their vocational path. Somehow against all odds, if we are to believe the artist himself, he took to visual arts through contacts with people from his neighbourhood, as a child. While having a physiological limitation (he is a daltonist), Raportoru delved into the voluptuous world of colours without too much deliberation, carving for himself a universe that is indeed less prone to chromatic explorations, and is fascinated by the decay of the universe.

Whatever I paint, even if it is a castle, turns into a slum (mahala in Romanian), states the artist, who is playing with gusto the role of agent provocateur. But – besides the provocation – he is right: Raportoru feels the marginal world where he grew up, carrying with him everywhere the experience of poverty that is always a menace, but also (for the strong ones) a challenge. Without this background, he might not have been attracted to visual culture, a domain difficult for him to reach due to his own personal circumstances mentioned above. But if his background might have been materially poor, it was visually rich. That double reality empowered the artist in the choice of his vocation, giving him the courage, but also the wit to pursue an unlikely career, coming from a community bound culturally more to music and poetry than to the visual arts, especially specifically to painting.

Raportoru in Romanian means “the one who reports, the one who bears witness”. The artist understands both the funny sound of this name in our mother tongue, but also its branding power. He always introduces himself as such – Raportoru – and this is a way of saying that he is present, that he is bringing forth something urgent, a message of importance. What this message contains precisely is eventually up to us, but the artist makes explicit his bond with the city, with its landscapes, with the idea of housing, of sheltering, and – I would add – the notion of identity.

And herein lies the fascinating dimension of Eugen Raportoru’s strategy. Because despite the sometimes raucous, savage touches of the brush, and besides the emphasis on a continuous, irrational stream of images produced with a feeling of exhilaration, the artist is orchestrating and performing a difficult task: to build a discourse compatible both with a modernity to which he aspires, and with a parallel universe – that determined by his ethnic identity. Like other leading cultural figures coming from a Roma background, Eugen Raportoru is explicit about his belonging only when necessary – a necessity that can have multiple roots.

On one hand, there is his preference for a certain aesthetics of decay. Eugen Raportoru pays tribute to a certain late wave of Expressionism in Romanian painting, namely to his mentor Corneliu Baba’s last period (the 1980s), but this overlaps with a culture of the vernacular, of commercial sign-painting, of the large canvases animating the surfaces of caravans and tents at the migrant open-air fairs popular in the southern and eastern parts of the country. A carnivalesque atmosphere, a sense of formal and energetic freedom circulates through the images.

On the other hand, there is his ambiguous relation with the conventions of modernity.  Raportoru is a high-culture practitioner, and his production is designed to fit the standards of this framework. Although his images do not speak directly to the status of the artist, there is an implicit acceptance of conventions: the canvas, the easel, the frame, the gallery walls are unquestionable elements of (self-)recognition and implicitly of belonging to the club. At the same time, the artist cuts corners with relaxation, and adopts “bad” solutions (as in “bad painting” – the mean turn taken by a group of artists in the 1970s); he is not impressed by the rules of taste, by the logic of composition, or by the tectonic of the easel.

And with this, we arrive to the third manner of unveiling his group identity: the tactical use of high culture. The aesthetic and morphologic conventions are not distorted by the artist in the name of innovation; he does not question the boundaries of the discipline. Raportoru ignores them pure and simple, in a tactical move meant to make space for the improvisational, for the vernacular, for the accident that opens a meaningful crack in the surface of art making. The meaning of this soft attack is the installation of a zone of freedom within the area of convention – and that is the tactical approach of Roma artists in every field, whether they are musicians, comedians, writers – or painters.

A sense of disorder is predominant here, and its value matches that brought by the sense of order: it is a matter of balance to understand both and to work with both. The model value of artists like Eugen Raportoru is precisely the transfiguration of the Roma condition from a Nemesis into a Victory.

I happen to know Eugen Raportoru’s work already for a long time, and I have been following his artistic tribulations with interest. The offer he made in the frame of the 2020 National Museum of Contemporary Art – MNAC Bucharest call for art acquisitions therefore came as a pleasant surprise. It is an installation instrumentalising the inventory of a living room, or actually an all-purpose room in the homes of poor people from South-Eastern Europe. The artist made it clear that it was not (just) an autobiographical work – but focuses on the socio-economic group to which Roma people belong – without being an exception.

I appreciate this work for its sincerity and also for its strategic stance: a Roma artist using his own material culture, and his identity, in order to speak about a broader group who lives, works, relaxes, loves, in simple, sometimes dire, overpopulated environments. His installation is both an aerodrome for helping his paintings to take off into the world, but also a strong autonomous work in its own right, bringing us into non-mediated, honest contact with the multi-layered realities of a universe where making art is just one part of the story.