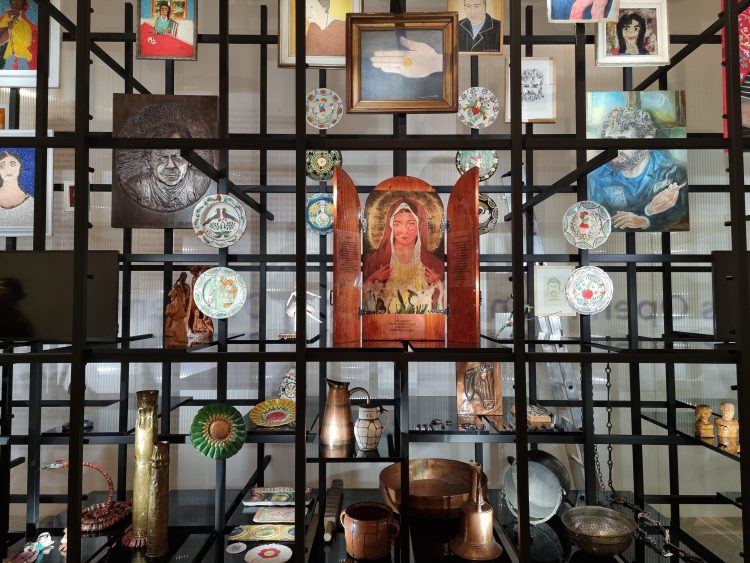 Rigová clarifies that their exhibition presents a view of one ‘local’ generation of Roma living on the territory of the former Czechoslovakia, which used – romano vakeriben – spoken common language among the Roma. “It was the aforementioned generation of Roma who, after 1989, believed that it was the ‘baršoniko revolucija’ that would bring the Roma phundrado drom – i.e., an open road on which the Roma would have the opportunity for the first time in history to decide about themselves as political subjects in a society that accepted their ethnicity and culture”.[1] This is how the title of the exhibition refers to the efforts of Roma intellectuals – members of the Union of Gypsies and Roma (1969-1971), “who were actually the first in our territory to raise fundamental questions regarding the establishment of a museum of Roma culture”.[2] From the initiative of Romani intellectuals, the Museum of Romani Culture was founded in 1991 as a non-governmental, non-profit organisation located in Brno, in the eastern portion of the Czech Republic. In the European (or maybe even global) context, it is a unique institution that documents the culture of Roma and Sinti. The museum’s collection contains over 28,000 collection items and is divided into 4 sub-collections and within them into 13 collections. The museum collection includes objects of traditional crafts and professions, types of dwellings, interior furnishings, clothing and jewellery, visual arts, written material, posters and invitations, audio, photo and video documentation, a library, echoes of Roma culture in the majority culture, and the museum’s self-documentation. In 2020, the museum initiated the building of the Centre for Roma and Sinti in Prague, supported by Norwegian funds.

How does the exhibition, Open Road / Phundrado drom, pave the road for such a museum? The curators decided to conceive the exhibition with two distinct sections: the first presents the open storage of the Museum of Romani Culture in Brno’s collection, and the second part presents the works of five selected artists of Roma origin. Generally, ‘open storage’ or ‘visible storage’ is a concept of presenting a large part of a museum’s collection, without being curated or interpreted, to its visitors. Access to museums’ collections is seen as the key determinant in visitors’ experience of museums recently, since most of the museums display only a fraction of their collections at a time. The trend that started in the 60s and 70s was supposed to democratise the museum collections. The Metropolitan Museum’s open storage was established in 1988, which later inspired the Brooklyn Museum’s Luce Center for American Art to display its collection as a long-term installation, entitled Visible Storage. In 2020, the National Museum of Modern and Contemporary Art in South Korea opened MMCA Cheongju Art Storage Centre, where the museum’s storage is displayed to the public. In Europe, the Victoria and Albert Museum created its open storage from the collection of ceramics and glass in 1994. The most radical approach to open storage so far was introduced in 2021 by the Depot Boijmans Van Beuningen, which was the first museum in the world to open its entire storage to the public. Comparatively, Open Road / Phundrado drom displays a large number of objects, paintings, statues, ceramics, and utility objects from the collection of the Museum of Romani Culture, presented as one full wall-length architectural construction. Hanáková explains that the composition of their open storage “is aestheticised into a kind of altar (where Lakatoš’ painting of an open palm with a crown coin hovers over the Virgin Mary rather than the Holy Spirit)”.[3] Alongside the objects from the museum’s collection, the open storage section also consists of video interviews with all of the artists in the second part of the exhibition. The video documentation and interviews demonstrate the importance of field work in the museological approach of the Museum of Romani Culture, while offering the audience the opportunity to get to know the artists better. Hanáková explains that: “It’s quite intimate material, but we felt it was important, especially if the viewer returns to the exhibition, which will run for two years, and wants to feel closer and to understand the artists better. Only when s/he puts on that purple headphone will s/he perhaps understand how important are, for example: family relationships and good food – traditional Roma cuisine – for Šestáková or how Ján Berky from Detva is troubled by injustice and prejudice on both [the Roma and non-Roma] side; how Lakatoš loves fishing and fits in a conversation in three languages; or how very shy the sculptor Daniel Kováč is… Dzurko is introduced in a separate film by Martin Hanzlíček from the end of his life – a film that in a sense thematises the fate of the (Roma?) artist”.[4] 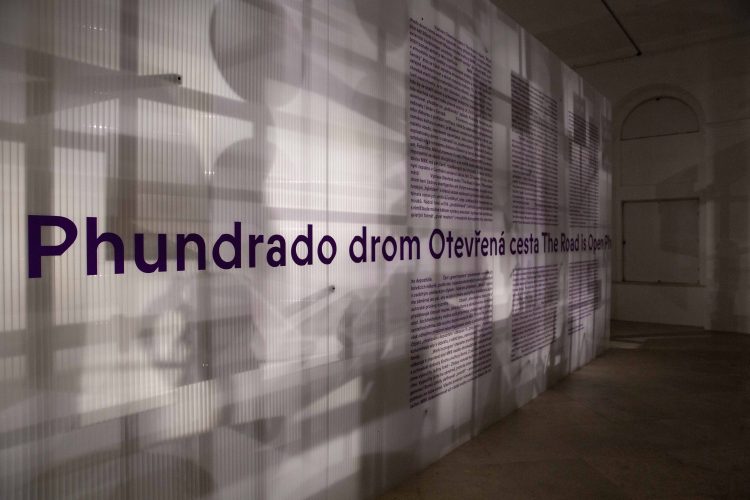 Installation view of the ‘Open Storage’ of the exhibition Open Road / Phundrado drom, Ethnographic Museum of the National Museum in Prague (Musaion), Photo: Žaneta Turoňová, the Museum of Romani Culture in Brno.

The second part, or as the curators refer to it, the ‘Great Masters’ hall, contains works by Ján Berky, Rudolf Dzurko, Daniel Kováč, Július Lakatoš and Markéta Šestáková. It is composed in a traditional art historical way: the hall contains the works of five artists, presented not as one thematic group exhibition, but rather individual focus and attention is given to each artist separately, with the name of each artist clearly highlighted with their works on the four walls of the gallery space, and the central composition of the statues by Daniel Kováč. On view are, for example, Rudolf Dzurko’s paintings created by the folding of coloured pieces of broken glass into vivid images, and Markéta Šestáková’s colourful embroidered paintings, often depicting very difficult life situations. For instance, her work My Destiny (2013) depicts a woman with a fork being stabbed in the bleeding shoulder, with tears streaming down her cheeks as she slowly unfastens her corset. As Hanáková explains further: “The corset is pronounced torn, and there is some kind of rope wrapped around the woman’s body: it’s obviously a picture of domestic violence”.[5] Despite the difficult themes, Šestáková’s work is incredibly detailed and intimate, and oscillates between the artist’s everyday reality and the imagined escapist images.

Viewing the collection of the Museum of Romani Culture, Rigová emphasises that despite the long history of Roma in Europe, the collection contains only a sliver of Roma tangible heritage. She argues that: “This is a fact that concerns not only our local environment, but on the contrary, the whole of Europe, since the position of the Roma in the past was what it was… It is a great pity that in the 1970s, when the pan-European effort of Roma intellectuals was strongest, similar museums were not established in other countries as ours later in Brno. Today we would have a much greater and more diverse view of Roma culture”.[6] How should such a unique collection of objects and artefacts of culture of the biggest transnational community in Europe be treated? What does the process of opening such a collection to the public and exhibiting its pieces do to the collection and to the formation of collective memory? Collecting and archiving one’s cultural heritage can lead to its preservation; however, how can it be further interpreted; how can one engage with it in a decolonial way? How can the related community of people engage with these objects, but also with the stories these objects can tell about the history and identity of the given community?

Sandhya Shetty and Elizabeth Jane Bellamy ask whether there can be such a thing as a ‘postcolonial archive’.[7] Rigová suggests that: “The old material culture of the Roma is obviously no longer able to be fixed and preserved, but what we do have is huge intangible cultural capital that is constantly being expanded and re-interpreted”.[8]  It was Jacques Derrida, who, in his iconic Archive Fever, argued that, “the archons are first of all the documents’ guardians. They do not only ensure the physical security of what is deposited and of the substrate. They are also accorded the hermeneutic right and competence. They have the power to interpret the archives. Entrusted to such archons, these documents in effect state the law: they recall the law and call on or impose the law”.[9] Ariella Aïsha Azoulay, in her Potential History: Unlearning Imperialism, offers a convincing critique of Derrida’s classic text, by arguing that: “the archive was made by people, for some and against others. It is never empty space, as the sentries claim, and it cannot be conceptualised as if citizens had never set foot inside it, […] By focusing on the figure of the sentry, Derrida’s influential essay exemplifies this omission”.[10] Azoulay is right in saying that the archive or collection cannot be conceptualised without the community it is related to. She adds that: “The archive should be understood on the basis of people’s concrete, material, emotional, visceral, and political presence and their interactions with archives as such”.[11] The new Roma and Sinti museum promises to “focus on current social issues, such as reflection on the current position of Roma and Sinti and the development of relations between Roma and majority society”,[12] and it hopes to become a new community centre with educational and cultural activities for the general public, which is open to dialogue and fulfils the mission of the Brno Museum, which is to preserve and make accessible the culture and history of the Roma. We can hope that this new museum will be a community centre with decolonial discursive and inclusive functions for all; that this museum will engage not only with the objects, artefacts, and the collection of Roma tangible heritage, but also with people. 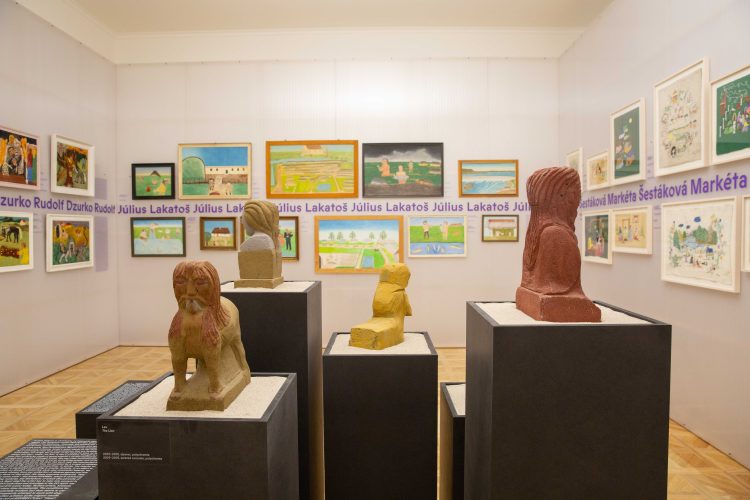 Installation view of the ‘Open Storage’ of the exhibition Open Road / Phundrado drom, Ethnographic Museum of the National Museum in Prague (Musaion), Photo: Žaneta Turoňová, the Museum of Romani Culture in Brno.

The exhibition, Open Road / Phundrado drom, has initiated an important inquiry into this long-term project with a reflective approach in working with the collection. With an open storage approach and video interviews, it openly values a discursive approach, rather than a single opinion route, in building the narrative of the exhibition. Through the display in the ‘Great Masters’ hall, it highlights the artistic qualities of each individual artist, including their individual life story and the context of their work. The Prague museum is planned to open in the villa on Velvarská Street, which the Museum of Romani Culture in Brno has been administering since 2019 and is currently renovating. Once the reconstruction of the villa by Adam Rujbr Architects is completed, the museum should open to the public in 2024. Rigová adds that: “It would be great if we could incorporate at least part of the exhibition we have prepared into the new space of the functionalist villa…”[13] The exhibition, Open Road / Phundrado drom, is open to the public at the Ethnographic Museum in Prague until 31 May 2024.

Ethnographic Museum of the National Museum in Prague (Musaion)

2 responses to “Open Road / Phundrado Drom: Laying Foundations for the Roma and Sinti Centre in Prague”