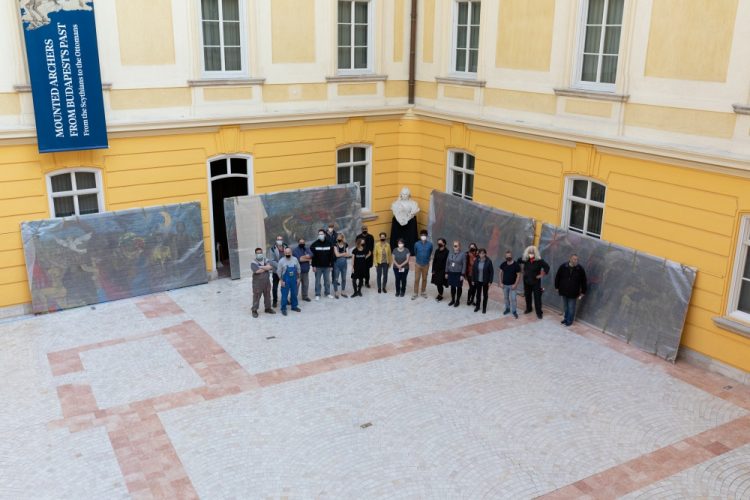 The arrival of the monumental panel painting (in four pieces) to the Budapest Historical Museum (BTM). Photo: Ákos Keppel/BTM.

The First National Exhibition of Self-Taught Artists in Hungary was already organised by Ágnes Daróczi in 1979, in order to bring into the limelight talented Roma artists; yet, the third such display, in 2000, continued to be held in the Museum of Ethnography (Budapest), rather than an institute of contemporary art, as if the exhibits were manifestations of an exotic and alien civilisation.

Despite the fact that the early 1990s, commonly referred to as the “cultural turn”, brought a paradigm shift in the course of visual arts, pinpointing the constitutive role of culture as a system of signification – thus revealing the various mechanisms through which Roma art was always classified as natural, primitive, naïve and exotic, there is still at present a powerful lobby which considers the Museum of Ethnography as the appropriate home for Tamás Péli’s Birth.

In the following essay,[1] Emese Révész aims to restitute the place of Birth in art history. This act aspires to deconstruct the existing visual regime and the colonial relations inscribed within it.

The genre of Tamás Péli’s panel painting, entitled Birth, is historical allegory. We can find art historical parallels in the painting of Historicism and Symbolism. Traditionally, the beginnings – the composition and representation of Genesis – play a large part in the creation of the concept of a nation-people. This pre-historical time is typically delineated by a mythological phantasy. In the foundation of community identity and collective cultural memory, a fundamentally large role falls to the national mythology.[2] The process of their literary and artistic shaping commenced in the early 19th century, but the creation (or in the words of historian Eric Hobsbawm, “invention”) of the mythical tradition of later delineated national communities still occurred over the course of the 20th century.[3] The literary and visual composition of the mythological tradition of the Roma people is typically just such a late development.

The central motif of Tamás Péli’s panel painting is the origin myth of the Roma people. In historicism, this moment was generally depicted by staging a moment of ancient history (Conquest, election of a Prince), creating the illusion of historical authenticity. Tamás Péli’s composition, however, combines multiple viewpoints: a mythological scene stands at the centre, accompanied by allegorical figures and characters referring to the advancing of historical time, and framed with contemporary portraits. The mythological core of the picture is constituted by the figure of the goddess Kali, who offers her first-born child, Manus, to the deity on horseback. Connected to this mythical-magical layer, is the depiction of symbolic animal figures (snake, eagle, dove, horse), which at the same time highlight the close to nature existence of the Roma people. In the lower left-hand area, references to the role the Roma have played in Hungarian history appear, from Rákóczi’s War of Independence, leading all the way to the more recent tragedy of Auschwitz. In the lower right segment, those personifying the typical occupations and activities of the Roma appear, while on each side are featured representatives of the reform Roma intellectuals, who have provided the spiritual background for the elaboration of the painting. 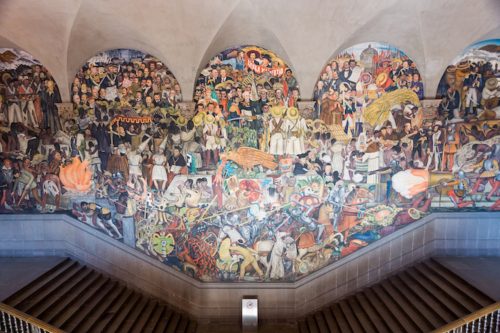 Diego Rivera: The History of Mexico, from: https://mymodernmet.com/diego-rivera-murals/

The painting’s historical approach is archaic, not historicising, to the extent that the timeline is not linear with a series of causal historical events taking form, but is rather broken, of an associative character, with an amalgamation of historical and mythical elements. In this sense – and with the terminology of Claude Lévi-Strauss and Jan Assmann – the shift in historical memory is resistant, typically a “cold” type.[4] We can find examples of such mosaic-like expansive approaches, rich in narrative, in the painting of such national communities in which their historical identity is also of later origin, similar to the Roma. Such is Diego Rivera’s monumental panel painting encompassing Mexican history (1929-1935, Palacio Nacional, Mexico City), or, closer in time to Péli’s painting, Carlos V. Francisco’s 1968 panel painting presenting the historical battles of the Filipinos, in Manila’s City Hall. Of interest in Péli’s composition is that at the centre stands the archetypical Mother figure. In the European visual tradition, the personifiers of nations are female figures (eg., Germania, Marianne, Pannónia). An analogy for the central role of the female figure in Hungarian visual antecedents includes Soma Orlai Petrich’s lithograph, entitled Emese’s Dream (1864), in which the archetypical Mother dreams the history of Hungary. In a kindred spirit with Péli’s artwork, here, too, the survey concludes with contemporary public figures, similar to the historical allegory of the National Museum mural (Mór Than, Károly Lotz, mural series of the Hungarian National Museum staircase), in which reform politicians of the recent past (1874-1876) appear in the final image. 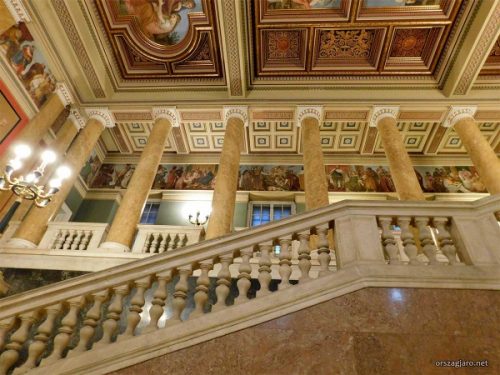 Mór Than: Mural series of the Hungarian National Museum (MNM) staircase, from: https://www.orszagjaro.net/magyar-nemzeti-muzeum/

The figures of the lower image zone connect the past of the Roma people with written history. A chronological approach appears uniquely here in the panel painting. Péli embraces their historicity by way of the events of Hungarian historical memory, with the Roma portrayed typically as supporters in the Hungarian War of Independence, as the Rákóczi Freedom Fighter horseman, as the military musician of the 1848 War of Independence, and soldier in World War II.[5] Alongside the partner in the fight for political freedom, the other historical role at the central axis of the panel painting is the sacrificial, commemorating the tragedy of the Roma Holocaust (porajmos). In the lower right portion of the composition, as a late descendant of the art allegory of the historicising mural series, the personifiers of various occupations and artistic activities characteristic of the Roma appear, which first and foremost identify them as a people accomplished in the arts.

Thus, in Tamás Péli’s composition, prevailing in parallel are the archaic-mythological and the modern-historical historical approach, standing at the intersection of the two: its central axis can be interpreted along the timeless notions of man-woman,  good and evil, birth and death, which is framed by the figures fixed in historical time (and also connecting with the present).

[1] This essay was commissioned by the curators – Eszter György, Teri Szűcs, Anna Lujza Szász – of the exhibition, Collectively Carried Out, on view at the Budapest Historical Museum from 8 June – 26 September 2021. The exhibition aspires to render visible Tamás Péli’s Birth: it aims to introduce the painting into the collective public space – generated by discussion and interpretation. A larger goal of the collectively carried out act is to initiate a dialogue about the final placement of the work in a space where not only can it regain visibility and accessibility, worthy of its art-historical value, but also the historical/civil rights narratives it embodies, of which it is one of the fundamental and founding pieces.