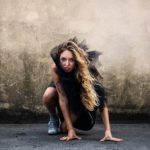 Born in a small Sussex village in 1996, Riah Knight’s music has been described as ‘ethereal’ ‘raw’, ‘angelic’ and ‘essential for the current political climate’. Blending original storytelling and evocative lyrics with laidback sultry vocals, jazz harmony and a twist of folk, Riah’s live performances take you on a poetic journey across continents and young heartbreak.

Of dual heritage British Romani descent, Riah grew up surrounded by the Romani activist movement through which she was both politicised and given a platform to perform. Before the age of twenty-one she had played at institutions such as Notre Dame, The British Houses of Parliament, the Brighton Dome and main stage at The London Roundhouse.

In 2017, she became a Roundhouse Resident Artist: playing solo support for artists such as Jimmy Webb and Portico Quartet. She also began presenting her radio show ‘FUSE’, on Brighton based Platform B.

Riah is currently working at the Maxim Gorki Theatre in Berlin, where she is employed as an actress/musician and where her musical material is being performed. She plays in their opening show of 2017 ‘Roma Armee’ (DER FAUST nominated, European Theatre Prize 2017, Rated No.1 in Nachtkritik) and their opening show of 2018 ‘Yes but No’ (“A highlight is Riah May Knight’s and Taner Şahintürk’s hilarious duet” **** Exberliner 2018) both of which have received rave reviews for their music. In 2018 Riah was also commissioned to compose music and poetry for the 1st Roma Biennial, and in 2019 went on to be invited to be part of the ensemble developing the production ‘Rewitching Europe’ with Yael Ronen and dramaturg Jens Hillje.

She also worked with RomaTrial to co-found the project Romnja Jazz, which aimed to highlight the profiles of Roma and Sinti women making music in Berlin. Recently she was also invited to become an Associate Member of the European Roma Institute for Arts and Culture, co-hosting the Tajsa Roma Cultural Heritage Prize.

Riah continues to perform as a solo musician and is working on her debut EP between tours and performances.