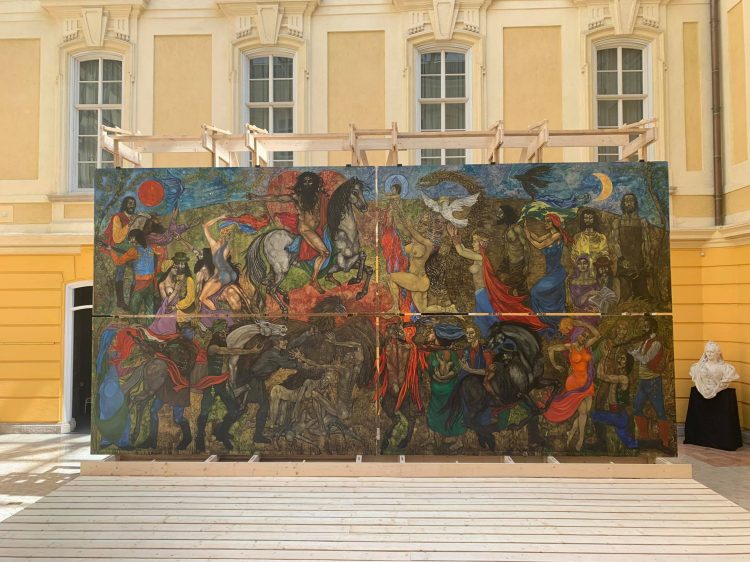 This week we present the film documenting the opening of the exhibition, Collectively Carried Out: Tamás Péli’s Birth. ERIAC Executive Director Tímea Junghaus takes you on an exclusive art historian-guided tour of the exhibition.

Entitled Birth, Tamás Péli’s monumental artwork is of unparalleled significance in many respects. Painted on fibreboard, the panel painting of nearly 41 square metres was completed in 1983 by Tamás Péli, with the contribution of his disciples, including István Szentandrássy. Birth was commissioned by the Szabolcs-Szatmár-Bereg County Council, and it was installed on the wall of the refectory of the children’s home in the Andrássy mansion of Tiszadob, also known as the City of Children. When the mansion was reconstructed as a hotel in 2011, the panel painting was removed and hauled in four pieces to the András Jósa Museum in Nyíregyháza. It was stored in the museum’s corridor, covered – safe, but unseen.

Realised as a collaboration between OFF-Biennale, ERIAC, and the Budapest History Museum, the purpose of the exhibition, Collectively Carried Out is more than rendering the painting visible: the goal is to introduce the painting into the collective public space – facilitated through discussions and interpretations.

Tamás Péli’s Birth arranges the figures of several interwoven broad narratives into a single composition. At the centre is an imaginary-dreamed Roma creation myth, surrounded on the one hand by episodes recounted through symbolic figures of Hungarian Roma history, and on the other hand by figures of a new genesis – the emerging Hungarian Roma intelligentsia. In this triple birth, a people, a historical narrative, and through its creators, a culture is brought to life, and the point of intersection, the manifestation of this triple genesis is Péli’s monumental piece.

Another goal of the “collectively carried out” act is to initiate a dialogue about the final placement of the work – which has been tucked away in storage since 2011 – in a space where the painting cannot only regain its visibility and visitability, worthy of its art-historical value, but also the historical / civil rights narrative it embodies, and of which it is one of the fundamental and founding pieces.