The Roma Pavilion at the Venice Biennale. From Abduction to Seduction, from Marginal to Universal 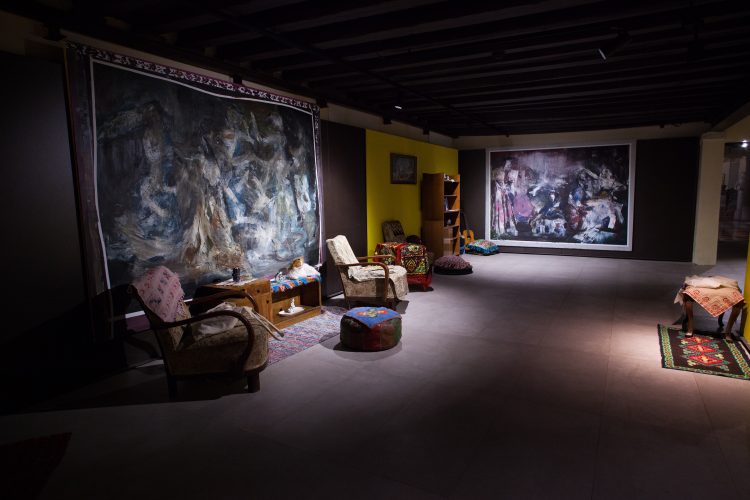 Organized as a collateral event of the 59th edition of the International Art Exhibition of Venice, the Roma Pavilion was a point of great interest on the Biennale’s crowded and extremely competitive map. And rightly so! Hosted this year by the Istituto Veneto di Scienze, Lettere ed Arti (the Palazzo Loredan) and commissioned by the European Roma Institute for Arts and Culture (ERIAC), the Roma Pavilion presented The Abduction from the Seraglio, an exhibition by artist Eugen Raportoru and curator Ilina Schileru, who are both from Romania. The theme of the project has a unique vibe that I believe reflects very well the collective consciousness and culture of the Roma, since ‘The Abduction from the Seraglio’ is both a Mozartian, Western story and an Oriental(ist) motif that has been kept in currency in the form of wall hangings, fairly popular in certain communities, particularly in Eastern Europe.

The Pavilion was conceived as a scenographic ensemble with three rooms fitted out as domestic spaces: a bedroom, a living room, and a kitchen, each with their respective furniture and objects, bringing in mind the home where the artist grew up and, by extension, suggesting a certain typology of dwelling in Roma communities—a space of memory, but also an idealized space. The central point of the installation is the bedroom, with a tidy bed, a floral carpet in front of it, and above it, on the wall, the famous hanging that gave the project its title. The hanging seems to play an almost apotropaic role as it overlooks the sleep or sleeplessness of those in the bed, as well as the other meaningful images surrounding it (all of them amateur paintings purchased at the flea market): a reproduction of Leonardo da Vinci’s Last Supper (a scene that is no less dramatic, if in a religious register, and like the ‘abduction’ theme, is also based around the idea of salvation); an interpretation of Ghergani Gypsy (Nicolae Grigorescu’s work, one of the ‘classics’ of Romanian art); and the view of a Roma camp with tents, containing ‘distinctive’ ethnographic motifs that unambiguously point to the Roma cultural identity.

The rest of the pavilion—the living room and the kitchen—is also set up as a private space, just as intimate and modest as the bedroom. Various items, such as the furniture, the carpets, the vases, the porcelain trinkets, the cutlery, a radio, and framed photographs decorate and complement the interiors, increasing the sense of their authenticity: this is a self-referential exercise both on a personal level, for the artist, and on a communal one, as the objects metonymically represent the domestic universe of many Roma households.

But these scenographic rooms are more than mere ‘samples’ of dwellings, as they also function as exhibition spaces, with Eugen Raportoru’s paintings hung on the walls. His works employ various motifs from Oriental carpets, but this time the images are rendered only vaguely, the scenes are suggested loosely. His paintings are informed by a neo-expressionist sensibility, with wide surfaces, strong thick brushstrokes, and a subdued chroma dominated by greys—a necessary counterpoint to the bright colours of the surrounding objects. His is a ‘free’ painting, which defies formulas and conventions, and encapsulates in its substrata the idea of liberty and otherness. It is precisely the presence of these paintings, which appear to be from a different world—that of exhibitions, galleries, and museums—that defies the impression of a simple ethnographic project. The well-considered concept and arrangement of the ensemble are to the credit of the artist and the curator, with the two registers—the installation and the paintings—astutely matched and calibrated, and employed to the benefit, rather than the detriment, of the components, the message, the atmosphere, and the subject matter.

As already noted, the cultural convergence effected is remarkable, as the project brings Western themes close to the Oriental aspect of the interiors: the Mozartian subject of the wall hanging, Leonardo’s Renaissance ‘supper,’ the baroque kitsch of the porcelain trinkets, the tarot cards, or the Romantic air of certain reproductions on display are juxtaposed with the abundance of decoration; with the distinct, ‘specific’ visual narratives that are discernible in both some of the reproductions and Raportoru’s paintings; and with an Eastern subjectivity that is envisaged as a self-identifying discourse (or, as Michel Foucault saw it, a modality that both produces and reflects meanings in a certain social context). Both these dimensions convey—in various quantities, images, and degrees of awareness—that particular mark of Roma identity that the project seeks out and puts forward.

The titular story perfectly illustrates this dual dimension, which is apparently, but only apparently, paradoxical, and provided a theme and a title that I consider entirely adequate for the project.

The Abduction from the Seraglio is a Singspiel in three acts, composed by Wolfgang Amadeus Mozart to Gottlieb Stephanie’s libretto. The story is about the attempt of Belmonte to save his beloved, Konstanze from the seraglio of Pasha Selim, with the help of his servant, Pedrillo. The piece premiered on 16 July 1782, at the Burgtheater in Vienna, with the composer conducting. It is worth noting that certain aspects of the opera reflect European Orientalism in the 18th century. For instance, the Pasha’s harem represents the cliché of sexual libertinage, while the hilarious/sinister overseer, Osmin embodies stereotypes of Turkish despotism. In spite of this, there is a positive dimension to this abusive Ottoman universe, as the story’s climax involves a gesture of altruistic forgiveness on the part of the Pasha.

In the end, what matters is the story’s central motif, the abduction itself. This was the scene that was disseminated the most widely in the form of wall hangings in rural and suburban areas, especially in Eastern Europe. The Oriental motif, the kitschy drama, and the masculine heroism were, of course, all key to the popularity of this scene. The theme and the hanging that bears it miraculously survived the wave of images brought about by capitalism and technology in the last 30 years in Eastern Europe, thus testifying to the seductive power of a motif that goes beyond fashion and models.

Though it is insufficiently documented, it seems the theme of the abduction from the seraglio was internalized by Roma communities (and not only by them!) around the second half of the 20th century, when it began circulating as a wall hanging. It may have become popular because in some way it corroborated an assumed ‘Oriental’ identity, which was different from that of the majority groups of Europe, and because it demonstrated Romantic and heroic qualities (undoubtedly masochistic, as it is an exercise of male power, but also the sexualization of this power), which were cherished in certain times and communities, with the important undertone of (individual) salvation as a metaphor for (collective) emancipation.

The exhibition also includes two performances with a specific focus on problematizing the female body and patriarchal domination. Entitled ‘Roma Women: Performative Strategies of Resistance,’ they were first presented live at the opening, and were subsequently shown as videos by the entrance to the display. Actress and activist Alina Șerban uses stories and storytelling as a strategy of resistance and identification, highlighting the conflictual dimension, social discrimination and redeeming power of self-expression. Mihaela Drăgan, actress, activist and founder of Giuvlipen, a feminist theatre company, presents a ritual performance in which Romani identity meets technology and witchcraft in a truly magical experience. The identity spaces created by Raportoru function as a perfect matrix for the two artists’ feminist discourses: a deconstruction of the female body as the ‘other,’ a decolonial critique of the Romani woman as an ‘exotic’ figure. These discourses around the body are complemented by the subtle but deeply meaningful presence, on the living-room bookshelves, of a selection of books about the body, violence, and abduction.

The books come from the library of RomaMoMA, an institution-to-be, which plays an important role for Roma (visual) culture and, implicitly, for this particular project. ‘RomaMoMA is a contemporary art project initiating a forum for collaborative reflection on a future Roma Museum of Contemporary Art, with the involvement of local and international, Roma and non-Roma artists, cultural experts, social scientists and the civil sphere’ (‘Eriac’ n.d.). The emphasis, the initiators tell us, is not on the creation of the institution, but on the ‘act’ of conceiving it. It is a discursive and performative process, in the course of which such issues related to the ‘museum’s’ role are discussed, with the involvement of all stakeholders, as collection strategies, exhibition practice, art education and mediation methodologies, along with essential questions such as the image that the institution should convey about Roma communities and the impact it should have on (minority and majority) groups.

The Roma Pavilion in Venice is part of this broader strategy. Despite being a collateral event, it exemplifies the degree of diversity and openness that the Venice Biennale, the most important regular spectacle of contemporary art, could display. And it is a much-needed openness, given that there have only been three Roma-focused exhibitions since 1895, with the first presented only in 2007—though a mention must be made here of this year’s excellent Polish display, for which a national pavilion was first given over to a Romani artist, Małgorzata Mirga-Tas, and her installation, Re-enchanting the World. A permanent Roma Pavilion then seems all the more necessary: it would represent not only a declaration of commitment to the promotion and preservation of Roma communities but also a warning against discrimination, populism and political extremism, all of which have seen a recent resurgence in Europe and other parts of the world. At the same time, once such a pavilion becomes permanent, it could function as a platform for mediation and inclusion, as well as for establishing connections with other ethnicities’ cultural institutions and entities of all sorts. Such an uninhibited presence could be a platform for collaborations and alliances across cultures and borders.

In this case, the exceptionality of the exhibition was essential for the success: the cosy warmth of the installation, the remarkable quality of Eugen Raportoru’s paintings, the excellent curatorial articulation of the project by Ilina Schileru, the good promotion of the display, and its favourable location within Venice earned the Roma pavilion considerable popularity. It served as a space not only for confession, but for affirmation as well. And if this affirmation is explicitly defined by a specific identity and community, it still has—as Raportoru himself says about his art—universal dimensions. It presents ‘The Abduction from the Seraglio’ not as an escapist solution, but as affirmation and recognition, a way to self-emancipation from marginality, a gesture of victory in progress—not without its magic, beauty, and seduction.