The Golden Thread – An Introduction to the Publication, The Other Side of the Image 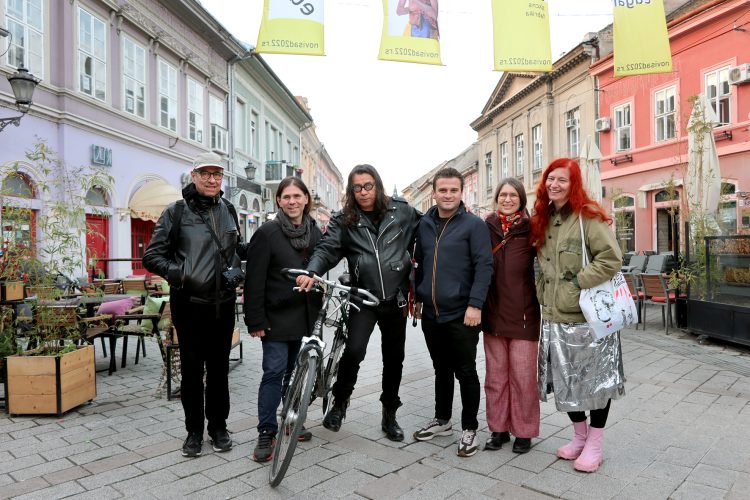 Let me start by paraphrasing what artist Sead Kazanxhiu said recently: 2022 has been a golden year for Romani contemporary art. It is possible to make this statement because the creations of Romani artists were to be found at major art events across Europe, from Venice, through the documenta fifteen in Kassel and Manifesta in Prishtina and Skopje, to Belgrade, where Sead Kazanxhiu’s The Nests were shown, in a golden format, twice, at two different exhibitions and institutional spaces.[i] This is a new situation, where The Nests, which in Kassel appeared on the façade of an art institution,[ii] have now entered another phase of their existence and have turned gold to reflect a paradigm shift.

The trajectory of The Nests is closely connected to my own editorial and curatorial activity in the project called The Other Side of the Image, which was realized in collaboration with Novi Sad multimedia artist Zoran Tairović, whose artistic and research-oriented practice ‘behind the picture’ was the inspiration for the title of the scheme, which grew out of the extensive conversations we had begun in 2019. Comprising a publication and an exhibition that was realized as part of the Novi Sad European Capital of Culture 2022 event series, The Other Side of the Image was to tell the story of a ‘golden transformation’ in the institutional framework and to capture this paradigm change in our own localities. It was particularly important that this transformation took place in a country such as Serbia, which lies outside the economic and cultural periphery of the European Union, and where a significant improvement of democratic processes is yet to be seen, including better political representation and material conditions for Roma people.

The publication The Other Side of the Image was made in conjunction with the exhibition of the same title, which brought together contemporary artists of Romani background—Delaine La Bas (United Kingdom), Zoran Tairović (Serbia), Nihad Nino Pušija (Germany/Bosnia and Herzegovina) and Sead Kazanxhiu (Albania)—at Svilara Cultural Station and the Serbian National Theatre in Novi Sad. The intention was to show the space of research that lies ‘behind the image,’ by revealing the concepts and processes that inform artistic practices and visual languages. This project revealed powerful approaches on the part of Zoran, Delaine, Nino and Sead, all of whose works draw on decolonial thought and institutional critique.

Within the framework of the conventional representational world of art, the aforementioned space is often invisible to the general audience. It is situated behind the visible works, in the specific approaches and practices of their creators. In this sense, the artists whose works are discussed in this publication—and who are very important representatives of progressive Roma culture and the contemporary art sphere in which they are active—advocate participatory artistic practices and critical approaches. Behind their works lie decades of effort and dedication to a research approach that follows from their own communities and the spheres of knowledge in which they live and work. The space ‘behind the picture,’ writes Zoran Tairović in the opening text of the publication, the manifesto-like ‘Activated Signal behind the Picture,’ implies a reaction to two key concepts, ‘invisibility’ and ‘suffering.’ ‘The most probable explanation,’ Tairović goes on to say, ‘for the existence of the idea of the unspoken lying “behind the picture” is that it is the result of a breakdown of all previous socio-political systems in which national art histories turn into classic pseudo-artistic dogmas’ (Tairović, 8). He suggests that the Eurocentric national cannons of artistic representations are rigid and need to be transformed, and this should be done in the cultural institutions at the heart of the nation state, and not outside of them. Tairović’s Tarot – The Major Arcana, a series of twenty-two paintings, is therefore a significant effort to reclaim the symbolic and allegorical language that existed before the Eurocentric order was established. The imagery of Tairović points to that which lies behind Eurocentric representations, and elucidates how to fight for reappropriation, for the Roma’s own allegorical space and symbolic formations. With his act of reappropriation, Zoran Tairović seeks to reclaim what was taken from the creative expression of the Roma.

The Roma’s crucial historical contributions to Europe are still rendered invisible by anti-Romani sentiment and the associated class racism, which demands that the Roma remain silent and not express their views, or that they live in a state of internal emigration, that they feel eternally guilty, thinking their very existence needs constant justification. Within such an unjust order, their right to a dignified life is annulled on a daily basis. Thus Zoran Tairović takes up the right of the Roma to have their own allegories and symbolic representations, fights the stereotypes that suppress them within the Eurocentric canon of culture and history. The deconstruction of this rigid canon was one of the major intentions of the artists and writers of The Other Side of the Image project.

The book represents an effort to build a space for reflection and the presentation of discussions between creators, artists, curators and writers, fuelling the hope of a solid foundation for diverse artistic and theoretical trajectories. The texts contributed by Matthias Reichelt, Delaine La Bas and Christine Eyene analyse specific artworks and artistic practices. The centrepiece of the volume is Suzana Milevska’s essay, ‘The Difference Between Saying and Doing in the Use of “We,”’ which, although it was written in 2015, has lost little of its relevance as regards theory or social engagement. Milevska critically examines aspects of representation, including those connected to the wave of appropriations and privileges in the use of ‘us’ that became evident especially after the Decade of Roma Inclusion 2005–2015, when ‘the internalization of anti-Romaism in art institutions turned into a symptom of the bigoted relationship between neoliberalism and democracy’ (Milevska, 32). Her essay looks at the paradoxes and limitations of the art context in an effort to transform our European societies.

Artist Delaine Le Bas and curator Christine Eyene discuss the former’s exhibition, Beware of Linguistic Engineering, highlighting the intersectional approach she adopted as she explored different responses through visual forms of protest, irony and the affirmation of linguistic and visual idioms. Language is Delaine’s main focus as something that pertains to her personal identity, as well as to Brexit and the pandemic, both of which represent, in her view, an excuse for furthering the tactics of division and exclusion, whereby language is used to lock us up and keep us out. Her installation at the Cultural Station Svilara in Novi Sad included Zigeuner Sauce, a piece which consists of three glass bottles that contain the artist’s urine and are displayed in a wooden frame. It takes aim at the stereotypes that prevail in the everyday reality of Britain and Europe: ‘Zigeuner Sauce is this sauce that’s across Europe and the word Zigeuner is used a lot in these recipes and when you go to a restaurant you can get something that has got Zigeuner in the title of it. It’s the German word for Gypsy but it’s not Gypsy. So, it’s not even the same word. This is where then linguistic engineering comes in. My argument has been long and I think that the fact that someone changes what they call you doesn’t mean they change what they think of you as a person, as a human being’ (Le Bas and Eyene, 75).

Matthias Reichelt discusses Nihad Nino Pušija’s photographic work in the essay entitled ‘Down There Where the Spirit Meets the Bone.’ Nino’s approach to his portraits is informed by a great deal of empathy. It is indeed the overarching theme of his 2018 book of photographs, which selects from an important oeuvre.[i] After emigrating to Germany from his native Sarajevo, Pušija followed the destinies of migrant Roma in Berlin, as well as in the former Yugoslavia. The result is a series of touching portraits of people who were given the ‘tolerated’ status in Germany, as well as photographs of housing for refugees, their ghettoization in Roma settlements across Western Europe, and the deportation of Roma into an uncertain future.

Tairović, Zoran (2022), ‘Activated Signal Behind the Picture’, in Jeremić, Vladan, ed., The Other Side of the Image, 8–9, Novi Sad: Interkulturalni teatar III/40.

Le Bas, Delaine and Eyene, Christine (2022), ‘Beware of Linguistic Engineering’, in Jeremić, Vladan, ed., The Other Side of the Image, 74–89, Novi Sad: Interkulturalni teatar III/40.

[i] Pušija’s album was published by Peperoni Books, a prominent German publisher that specializes in photography publications of this type.

[i] The golden Nests were exhibited in Belgrade at ERIAC Serbia and at the Art Pavilion ‘Cvijeta Zuzorić,’ in September–December 2022.

[ii] I formerly discussed Sead Kazanxhiu’s intervention on the façade of the Fridericianum as part of the documenta fifteen exhibition in Kassel in ‘How Many Swallows Make a Summer? On Sead Kazanxhiu’s Nests.’ In addition to being an artistic metaphor, the oversized nests perform a great deal more, by problematizing institutional discrimination and emphasizing hospitality, which is inextricably interwoven with the communal life of the Roma. See https://eriac.org/how-many-swallows-make-a-summer-on-sead-kazanxhius-nests/.

The Other Side of the Image

The catalogue of the exhibition is available here.