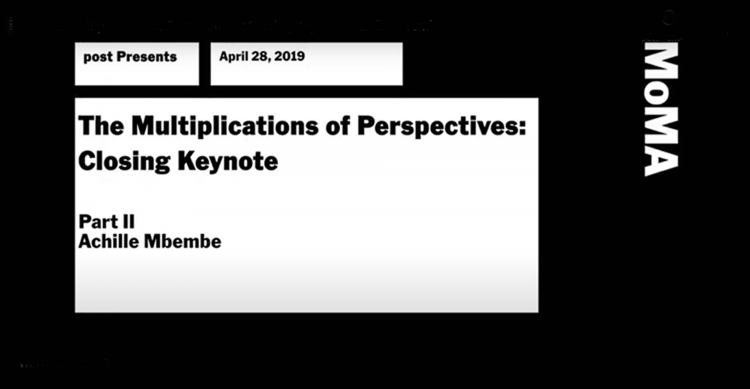 This video was first published on post, The Museum of Modern Art’s online resource devoted to art and the history of modernism in a global context. This presentation was part of The Multiplication of Perspectives, which took place in April 2019 at The Museum of Modern Art, and brought together scholars, artists, and curators from around the world to engage publically with issues that have been taken up internally within the C-MAP research programme over the last decade. Find the original post about Mbembe´s closing keynote here

The Multiplication of Perspectives offered a variety of lenses through which to consider circulation, entanglement, and disconnection in the museum today, focusing on some of the promises and pitfalls of a “global” approach to art and its histories. A series of dialogues, forums, keynote presentations and screenings juxtaposed particular histories and practices within a common thematic or methodological framework, as participants contributed with a multiplicity of perspectives to issues that preoccupy us today. Marking the 10th year of MoMA’s global research programme, Contemporary and Modern Art Perspectives (C-MAP), The Multiplication of Perspectives has been an extension of research related to art histories in Africa, Asia, Central and Eastern Europe, and Latin America and the Caribbean, while also introducing threads of inquiry that point toward new directions for further engagement.

The Multiplication of Perspectives proposed the impossibility of attaining a properly global view from one privileged position. In facts, Global is a word that is now frequently referenced in art discourses, just as the call to include an international perspective increasingly has become an articulated goal for art history and institutions. The symposium thus underlined the importance of recognizing the plurality of viewpoints that any geographically-inclusive approach to the study and exhibition of art must necessarily entail.

Achille Mbembe’s writings on African history and political and critical theory draw on a broad variety of disciplines, languages, and intellectual traditions. His work challenges colonialism and its consequences, modernity and western thought, and proposes a renewed understanding of power and subjectivity in post-colonial Africa. His book Critique of Black Reason (2017) sets out to build an image of Blackness in all its complexity through the reading of contradictory imperatives of racial capitalism. In his closing keynote for the symposium, Achille Mbembe reflected on the global present and observed a recurring demand for durability in a planet in need of political and aesthetic repair.

ERIAC also took part in the programme with a lecture by Executive DIrector Timea Junghaus, in the framework of the Incommensurability Forum, interrogating tensions between a global approach and site-specific study to make space for the untranslatable. More info here

Achille Mbembe is a Cameroonian philosopher and political theorist based at the University of the Witwatersrand in South Africa. He has written extensively in African history and politics and critical theory, including On the Postcolony (2001); Critique of Black Reason (2017); Necropolitics (2019); and Out of the Dark Night: Essays on Decolonization (2019). His books have been translated into numerous languages. A member of the American Academy of Arts and Sciences, he is the winner of the 2018 Gerda Henkel Award and the 2018 Ernst Bloch Award.