The Whip and the Mask 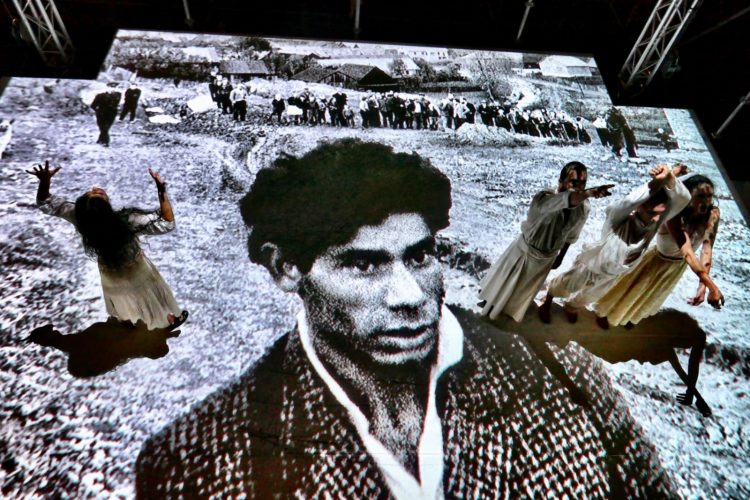 A Spanish Roma at the front of the stage

In many Romani theatrical experiences, there is an unconscious desire to get out of Modernity, out of that public space that forces you to choose a competitive representation of an identity. Of any identity. It is lived, or wants to be lived, as a betrayal of the very essence of the processes of public recognition in the performing arts, which are, by necessity, fluid and not fixed, creators of spiritually charged moments. The Roma sense of time, as we in the Roma theatre know, is centred around Romani spaces. Not necessarily with the typical associations with the word ‘Romani’ featured on the poster of the announced show.

First page in a notebook: I approach each new project with a new notebook. Hardcover and large size. With white sheets. It will be the new logbook that accompanies me. I make annotations that mix the list of things to do, the very first impressions of what I initially wish to see on stage, and the schematic drawings that I make to communicate with the frustrated set designer within me. The scrapbook with the drawing of the classical perspective that I learned in adolescence. It is my mise-en-scène book. Handcrafted. Physical.

I am a theatre director. I sit in front of a rehearsal. I watch. I observe. I move things. I explain myself stuttering. Sometimes I sing. I ask, with affection, for the cast to repeat from the beginning. I stop the rehearsal when I see that I am getting lost, that we are getting lost. And I go back to the beginning. To the first notes. That work that I see when the curtain closes at the premiere of the show, is the difference between what I dreamed of and what I managed to realise from the specific circumstances of this production. Pure historical materialism.

And I narrate stories. Above all, I tell stories. A storyteller who directs theatre. This is a story, duly magnified and suitably infused with research proposals not yet realised. I hope it is consistently piecemeal. As I recognise that I am.

First scenes. I see myself in the bedroom on the third floor of a house in Whitechapel in 2001, and I am writing a project together with Moritz Pankok.[1] I would like to work with those companies of Romani actors that I considered world-class back then: Romen Theater, Moscow; Roma Theater Pralipe, ex-Yugoslavia-Germany; Divadlo Romathan, Czech Republic; and Cirque Romanes, in France. It is my first trip outside Spain, and I aspire to see myself working as an actor with them. I do not want to do academic research. I want to travel while working. I study art history in Seville, or so I tell myself as a family excuse, and I work a lot as an actor for a company in Seville. I feel like a 20-year-old Peter Brook, who had to lie to get interesting jobs. I have worked for a Master of Saint Martins in London without having any qualifications, and I have done contemporary dance-theatre without really knowing how to dance. My friend Cira Santoro tells me that I am the invisible theatricality and the flamenco. I’m not sure about that – but I traverse London in a blue velvet jacket, a white shirt, and a red silk scarf. Flamenco is my passport.

Second scene. The stage is divided into three parts: a circus tent, a demonstration of Roma refugees in Düsseldorf; and the window of a van on the way to Croatia. Life leads me to fulfil the dream of meeting with Pralipe, which was a refugee company in Theater an der Ruhr, Düsseldorf, and I am invited to see the premiere of their new play, Carmen, in a circus tent. It is the first time I see a work entirely in Romanes. Featuring Silvia Pinku, Saban Bajram, Mustapha Zekirov, etc. – the big names. With Sinti music as background sound that covers passages from Bizet’s opera. Months later, I would replace Eduard Bajram in the role of Don José, and I was able to do some touring around former Yugoslavia. English, Italian, Romanes and the Spanish Caló. I am part of the strange European theatrical avant-garde that is a surviving piece of the Yugoslavian Roma struggle of the 70s and that survives in Common Market Europe. I participate in another of their shows, Khamorro: the umpteenth story of the trip from India to Europe through music. Classical flamenco singing, while Saban recites passages from the Ramayana in Romanes, and Silvia goes into labour in an imagined desert. Of course, everything is a beautiful lie. One day, when there was little public, some Roma brothers sneaked in, who had seen the posters around the city. “We are Roma, and we are demonstrating in the Westphalian parliament because they want to expel us from Germany. We come to see Pralipe, and we have no money”. There is a wonderful chaos. The best audience. They occupy the scene. Literally. I live, happily, the contradictions. Back then, I did not analyse them. Pralipe disappeared. History runs through them. We will always follow them. 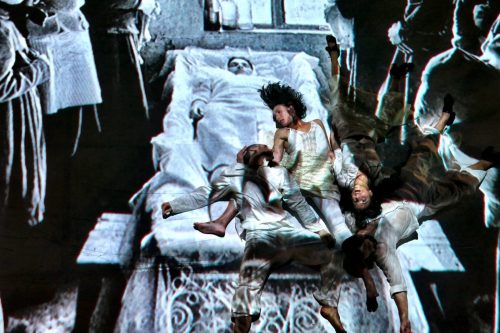 The Times and Spaces of the Roma

Scene three. The director sits down and reads: in many Romani theatrical experiences, there is an unconscious desire to get out of Modernity, out of that public space that forces you to choose a competitive representation of an identity. Of any identity. It is lived, or wants to be lived, as a betrayal of the very essence of the processes of public recognition in the performing arts, which are, by necessity, fluid and not fixed, creators of spiritually charged moments. The Roma sense of time, as we in the Roma theatre know, is centred around Romani spaces. Not necessarily with the typical associations with the word ‘Romani’ featured on the poster of the announced show. Sometimes, that created Roma reality, that is a bit secret in the eyes of the gadje gaze, fights with the overexposure in which we are forced to perform, dressed in the gypsy costume of the spaces of the institutionality of this Modernity (is there another?). To dream of an invisible Roma theatre, not subject to the tyranny of representation or the simple intrigue of fiction. A Romani Aleph [2] that allows us to fill our body memory with things that we cannot tell easily with words. Images with sounds and smells that are neither images, nor sounds or smells. Perhaps thus, in that founding movement that gives meaning to the Roma space, we will live many times apart from the representation of the diversity of the empire. Of all empires: the Gaznavi, the Ottoman, the Spanish, or the American. The director closes the notebook and blows out the candle that illuminated it.

Sketch of a stage scenery. I have an experientially tense relationship with flamenco. I can choose from where to explain it to myself. I almost always end up falling into contradictions. There is no solution. Flamenco is a problem. I collect flamenco images for a Roma-Gitano theatrical pluriverse under construction. One: it is the shadow of a baroque party that evolves from a setting – first Moorish, then Native American, and finally Black. It is the Spanish Roma-Gitano who, in a continuous nineteenth century era, directs the party that celebrates the empire that is gone. Two: theatre is older than flamenco; we Roma are older than flamenco. Racism, as a hierarchical order, is contemporary with the public appearance of flamenco. Flamenco ego, Roma ergo sum. Three: it is the measure of all things, which underpins our value in the identity market; It is the vertebral axis that endows the being: you move away, or you approach the axis; the eye is on you. Four: a cage full of birds, in which we are the ones who, so they say, sing the best. A cage. And five: there is no escape. Unesco has arrived and has placed us in the eye of Modernity. The Roma of the world must, and can, get us out of the cage.

The Logic of Universal Expositions (that’s how they see us, and that’s how we give it to them)

Flyer text: In the History of Roma theatrical experiences, there should be a special chapter about the encounters with Roma from very different traditions and countries in the contexts of the universal exhibitions of the 19th and 20th centuries. These encounters are the Roma background of the fantasy in which, many times without us deciding, we get placed, with our political strategies, our business plans and even our desires, into the spaces of institutions among the nations of the world. It is a long-time dream of the European Roma of having a great theatrical institution in one of the great cities of old Europe, with the possibility of reviving, and building, our repertoire of theatrical milestones. A home where we can listen to the richness of our language. A refuge for artists who need resources to create, and a crossroads where we leave traces for those who come after. This legal fantasy, easily justifiable in the demand for compliance with cultural rights and in the control of one’s own representation, aims to house a space for non-representation around the trust of a coffee between brothers who greet each other at untimely hours, when the offices close. Count on me to build that theatre, but then we will go celebrate at our backstage bar.

Epilogue after the curtain falls: The most alive of all the arts harbours a congenital breath of death in its essence. It dies when it is being born. It lives in the memory of people, mainly of the body, but not only. The rest – what is not memory – is a paper that reflects a shadow. It is, or will be, history. Or even worse: a jpg file on a web page. Who could dare to call what happens online (does it really happen?) “theatre”? “Theatre is a plague”, Antonin Artaud came to imagine, and that cry challenges us now more than ever. Whatever has to happen in that specific space and time of the future international Roma scene, remember that it does not matter if you manage to get close to the aleph, to that healed scar that we caress, and that sings to us, whispers to us, makes us cry and laugh, all at the same time. It does not matter if it does not fit, this time, in the time of the others. That of fashions. Think that in the Roma space, where we live our own fiction full of real memories, around a coffee backstage, between sisters and brothers, wonderful things can happen. And there will always be an old Roma man who will want to tell stories to a Romani girl of the 21st century. 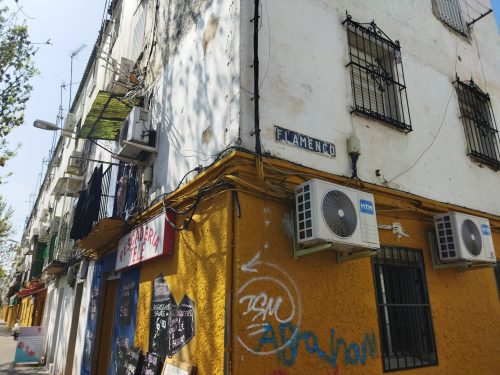 Miguel Ángel Vargas (1978, Spain) is an art historian and theatre director living and working in Spain. As an independent researcher and artist, Vargas combines Flamenco, theatre and Romani history as experienced-based themes of his artistic and academic enquiry. He has worked internationally as an actor, director, set designer, production manager and even opera technician, among other roles in the performing arts. He has collaborated with many academic institutions, including Central Saint Martin’s College of Arts of London, within their Performing Arts MA programme, the University of Seville, and Central European University in Budapest.

[1] Moritz and I have been friends and compadres for 20 years. Cultural promoter, producer, set designer, gallerist and, for me, a good photographer. For more information, see: Romarchive.eu and https://www.romarchive.eu/en/collection/p/moritz-pankok/

[2] Following Argentinian writer Jorge Luis Borges, the aleph is a point in space that contains all other points. In Romani terms, it would be a way to connect particular experiences of Roma to all the Roma of the world. See: https://en.wikipedia.org/wiki/The_Aleph_(short_story)

2 responses to “The Whip and the Mask”