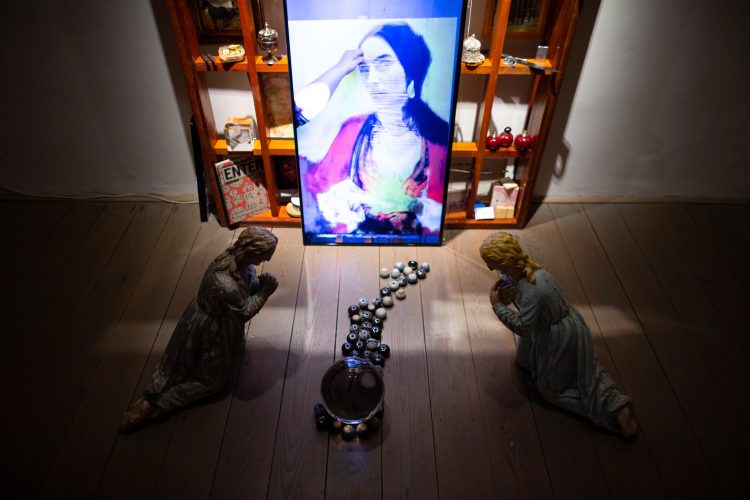 The European Roma Institute for Arts and Culture (ERIAC) is proud to present Emília Rigová: And the One Doesn’t Stir without the Other, curated by Timea Junghaus, an official Roma exhibition at the 23rd Triennale Milano International Exhibition. The Triennale takes place 15 July – 11 December 2022, under the title Unknown Unknowns. An Introduction to Mysteries. The International Exhibition is conceived as an important forum for reflecting on tendencies and contradictions of the present and on the urgency of the challenges currently facing our planet. It is a space for open, multilateral debate and interaction, in which a variety of disciplines, experiences, cultures and perspectives all come together.

Emília Rigová’s altar explores and honours the oeuvre, career, success and life of her alter ego, Bári Raklóri. Referring to Rigová’s Roma origin and family history, the persona of Bári Raklóri allows the artist to evade the collective Roma identity as a minoritarian artist and facilitates acts of self-definition and freedom. Her alias functions as a catalyst to narrate and embrace her Roma origins, leading the viewer into the dense groves of her personal and familial tales and experiences.

The sculptural arrangement exhibits personal items, family reliquiae, found objects, photographs, multimedia projections and artworks (in reproduction or fragments), assembled on an altar-like wooden structure. In their heterogeneity, the aesthetic weave of these elements creates an evocative and transcendental illustration of the contingent incommensurability of Roma identity.

The figure of Bári Raklóri enables Rigová to reclaim the orientalism and romanticism projected onto the Roma subject by dominant culture. Building on Roma cosmology and forms of knowledge, as well as the richness of their spiritual and material traditions, she develops narratives and cultivates a self-determined imaginarium of Europe’s largest ethnic minority. In elaborating hidden Roma (her-)stories rooted in affective familial rhizomes, she reveals their entanglement with overarching historical, national narratives in Europe.

The exhibition unfolds as a site-specific Wunderkammer, consisting of five additional sculptural assemblages developed and constructed in collaboration with notable members of the Milanese Roma community. These affective webs can be understood as the tangible materialisations of each of her collaborators’ voices, displaying personal memories and stories, illuminating the intangibility of their polyphonic community. In this resonatory space, Rigová examines the potential of the experiential, the personal in relation to the communal, and explores an understanding of identity and community through time.

In the video, Vomite Ergo Sum (2018), Raklóri is on her knees and expels liquid gold from her mouth. Testing the bodily limits, she allows for this toxic metal to traverse her body, complicating notions of identity. Gold is an integral material in Roma culture (travelling currency), charged with additional layers of meaning as it materialises the potentially “inner, authentic” and the “foreign, abject”. Crossing B(l)ack (2017) meditates on the artist’s light skin tone that allows her to pass as non-Roma in the eyes of dominant society. By stylising herself as a black Madonna, an iconic female figure of identification for Roma women, she makes palpable the violence involved in ethnic categorisation and the complexities of claiming the Roma identity. In Batman and Robert (2018), artist Robert Gabris wears Raklóri’s vest Bulletproof Culture, covered in the colourful and lively ornamental tradition of Roma fabrics. By using a traditionally decorative tissue in this manner, Raklóri nods towards the precariat and vulnerability of minoritarian culture and arts production. In her series of spatial interventions with the Romani carpet (Untitled, 2014-2016), Bári Raklóri thinks through the exclusion of Roma from society and creates an inviting space of hospitality and peaceful coexistence in difference. The carpet also becomes the centrepiece commemorating the Porajmos (Romanes for Roma holocaust by the Nazi regime, lit. “devouring, destruction”) in her video (out of) the deadlock (2016). Raklóri transforms herself into an embryonal memorial in the woods, sonically accompanied by a distorted recording of a relative’s funeral. Despite the stillness of the image illustrating the deadlock of Roma refuge in the forest, the power of song references the future and survival of the Roma people. In Covering Up (2016), Raklori’s hand sutures existing imagery amidst the brittle and dramatic sonic effects of the threads slowly piercing through the canvas. The stylised depiction of a Roma woman is subverted by the overlay with thread and the scratchy sonic reality of metamorphosis, of critical redefinition. Fabric as an aesthetic tool also underpins There is No Freedom Without Victory (Ishtar) (2019), a video performance dedicated to 8 April, International Romani Day. The artist stands on a beach, a red textile inspired by traditional Romani headscarves in her hands, resisting the strong winds tearing at the fabric, in reference to the Mesopotamian goddess of war and love (Ishtar). The GIF Bári Raklóri (2016) illustrates the artist’s play on identity condensed in the name of her alter ego: bári (“big”) and raklóri/-o (“non-Romani girl/boy”) combines the symbiotic oscillation between Roma and non-Roma as reflected in the use of a nickname in Romani that designates a non-Roma body and experience. A moment of personal catharsis is captured in the performance Intimate Public Catharsis (2013): red liquids drip from the top of a cage in which the artist is trapped, the white fabric enveloping her slowly changing colour, presenting in a visually stunning manner the intensities of the body exposed in public, the intimate turned outwards.

Emília Rigová (*1980) a/k/a Bári Raklóri, is a Slovak visual artist and academic of Roma origin and recent laureate of the Oskár Čepan Prize. She teaches art at the Matej Bel University in Banská Bystrica (SK), where she established the Department of Roma Art and Culture in 2019.