ERIAC has a unique and single mandate as the first transnational, European-level organization for the recognition of Roma arts and culture.

ERIAC exists to increase the self-esteem of Roma and to decrease negative prejudice of the majority population towards the Roma by means of arts, culture, history, and media.

ERIAC acts as an international creative hub to support the exchange of creative ideas across borders, cultural domains and Romani identities. ERIAC aims to be the promoter of Romani contributions to European culture and talent, success and achievement, as well as to document the historical experiences of Romani people in Europe. ERIAC exists to be a communicator and public educator, to disseminate a positive image and knowledge about Romani people for dialogue and building mutual respect and understanding.

The main long-term aims of ERIAC are:

– To educate and inform the non-Roma population about Roma arts and culture and to help for creating understanding, tolerance and mutual respect between Roma and non-Roma communities;

– To raise awareness among European institutions, policy-makers and stakeholders about the role of Roma arts and culture and to build up a broad partnership across Europe (and beyond) for support of Roma arts, culture and communities.

ERIAC’s vision is grounded in six founding principles, which will define the Institute’s establishment, core functions, governance, structure, and membership:

The 1971 first World Romani Congress was a historical milestone which marked the beginning of a new era of international Roma movement. This process of gradual political awakening among Roma was accompanied by a parallel process in the field of arts. Indeed, one of the major achievements of the First World Roma Congress was the creation of important symbols intended to unite all Roma – namely, the Roma flag and anthem. Symbolism, and its aesthetics, meant to reaffirm a political Roma identity, shaped and articulated by Roma themselves. Cultural and artistic practices were a powerful premise which sought a similar political agenda – that of Roma self-emancipation. After the first World Romani Congress in 1971, Roma visual artists started to claim recognition as a group. This collective consciousness of the European Roma community was essential in disrupting the exclusive operation of the cultural scene and criticizing the age-old practice in which Roma people were the victims of representations created exclusively by non-Roma. Furthermore, it pointed out how this European imagery and iconography had forced Roma into the conceptual ghetto of “the Gypsy”.

The idea of the European Roma Institute has been proposed by Romani intellectuals for decades. Agnes Daroczi, from Hungary, has been one of the most vocal proponents of the idea, stating that, “When in 1992, after the change of the political regime, I founded the Romedia Foundation, I knew that in order to be able to speak of ourselves, to express our interests, to develop a suitable image, we need our own narratives and our own institutions”.

The idea of creating an international institution of Romani culture was taken up again in 2014 by a group of Romani cultural producers, intellectuals, and activists who eventually formed the Alliance for European Roma Institute, as the driving force behind the advocacy efforts to build a Roma Institute.

The Council of Europe and the Open Society Foundations expressed their interest to provide institutional, material and financial support to make the European Roma Institute for Arts and Culture a reality.

It took over 4 years of dedicated work of Roma and non-Roma supporters as well as representatives of the Alliance for European Roma Institute, the Council of Europe, and the Open Society Foundations to establish the Institute as a viable and independent institution. ERIAC was successfully registered as an independent association under German law in June 2017 and launched during a ceremony in Berlin on the 08 June 2017.

ERIAC has a unique and single mandate as the first transnational, European-level organization for the recognition of Roma arts and culture.

The ERIAC office in Berlin serves as the headquarters to support the large network of Roma individuals and organizations working in the fields of arts and culture.

ERIAC functions as an international hub which strives to promote the activities of Roma organizations, intellectuals, and artists to form multilateral initiatives and regional alliances, and to connect them with the policymakers and leaders of the different national and European levels.

The front office in Berlin gives space to a contemporary art gallery and an educational program which is open to the public and welcomes individual visitors and visitor groups. 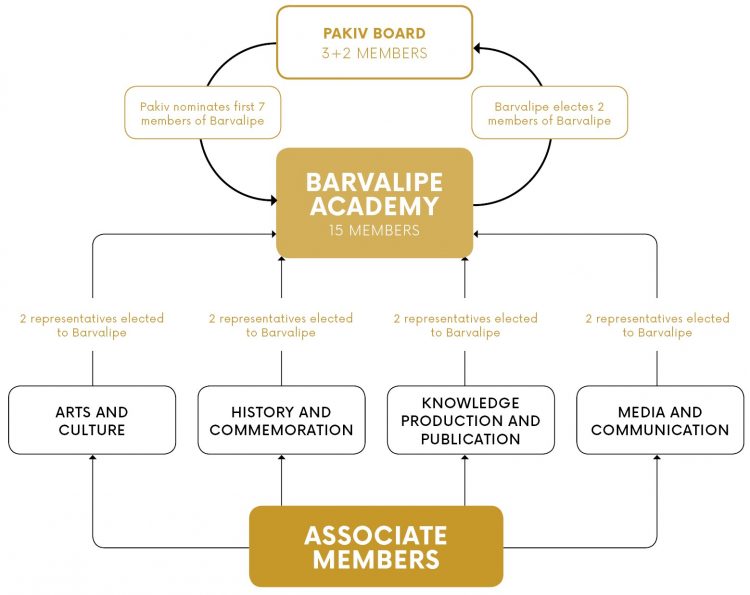 ERIAC can develop and thrive thanks to the network of supporters, allies, and friends who contribute in a variety of ways to help fulfill ERIAC’s vision and mission.

The ERIAC Office in Berlin curates its exhibitions with the support of Kai Dikhas Gallery (Berlin) and Gallery8 (Budapest).